The federal government’s final budget before the fall election proposes new measures to help workers upgrade their skills and training through a tax credit and employment insurance – but it relies heavily on support for the initiative from the provinces and co-operation from employers.

The proposed Canada Training Benefit targets workers between the ages of 25 to 64 and would spend $1.7-billion over five years and $586.5-million each year after that.

But the benefit is already receiving mixed reviews, with some praising the rights of workers and others worried about the impact on small businesses.

Eight ways the budget will affect your personal finances

Finance Minister Bill Morneau said the government has heard from Canadians who are anxious about the way work is changing.

“This includes young and unemployed people who need help getting into the job market. And it also includes more experienced workers, who worry that their existing skills might not be enough for them to find and keep good jobs until it’s time to retire, or who want new skills so that they can move up in their current jobs,” Mr. Morneau said in his speech to Parliament after tabling the budget Tuesday.

Hassan Yussuff, president of the Canadian Labour Congress, welcomed the announcement, saying training “is now recognized as a right.”

“By making it a right and saying Canadians are entitled to do this, of course there is some criteria, but I think it changes the relationship,” he said of the dynamic between employees and employers.

But he said that while all Canadians will be entitled to the program, legal protection will be required at the provincial level to ensure that if an employee takes time off for training, they can return to their job when it’s done.

“They know that giving people training will enhance their opportunity to stay employed.”

Dan Kelly, the president of the Canadian Federation of Independent Business, said his organization has “reservations” about the Canada Training Benefit, calling it an expensive program that will increase the cost of the Employment Insurance program.

“Will small businesses be required to hold open a position if an employee has always wanted to take a paid leave from work in order to study Latin or interpretive dance?” Mr. Kelly said in a statement.

The training credit would give working Canadians $250 every year to put toward the cost of training, with a $5,000 limit.

All together, Mr. Morneau said, workers will get four weeks of training every four years with up to $1,000 to help cover lost income. Workers will need to accumulate 600 hours of insurable employment to qualify, he added, and there’s a leave provision to ensure their jobs are secure while they’re away.

The leave provision would have to be negotiated with provinces and territories, which would be required to make changes to labour legislation.

“In the coming months, the government will consult with workers, employers, educational institutions and training providers, as well as provinces and territories, to finalize the design of the new EI Training Support Benefit and leave provisions,” the budget reads.

Mr. Kelly said the CFIB welcomes the rebate offer to help cover some of the increased costs to fund the new program, but he urges the federal and provincial governments to engage in “significant consultation” to ensure the needs of employers are considered before launching EI benefits or job protection requirements. 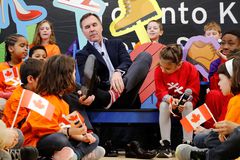