Audrey Parker was given a lethal injection and “died peacefully” in her Halifax apartment, surrounded by close friends and family, friends said in a news release late Thursday afternoon.

“Her death was the beautiful, end of life experience she wanted,” they said.

While the two-year-old law allowed her to end her prolonged suffering, the 57-year-old former image consultant issued a statement earlier in the day, saying the legislation had forced her to choose to die sooner than she would have liked.

“I wanted to make it to Christmas and New Year’s Eve, my favourite time of the year, but I lost that opportunity because of a poorly thought-out federal law,” she wrote in a Facebook post.

But Parker said she loved her life and had no regrets.

“I feel like I’m leaving as my best self and I’m ready to see what happens when I die today,” she wrote. “The one thing I’m happiest about, is that I finally found ‘my people’ during my lifetime. I’ve even met new people that I already adore near the end of my journey so it’s never too late for anything in life.”

Parker stressed that the law had to be changed because anyone approved for a medically assisted death must be conscious and mentally sound at the moment they grant their final consent for a lethal injection – a provision in the law called “late-stage consent.”

The provision was included to protect vulnerable people.

However, Parker said she would have been denied her wish to end her life with medical assistance if she had become incapacitated by her advanced illness or the pain medication she is taking.

“Dying is a messy business,” she wrote. “I can’t predict when cancer will move into my brain matter or when something else big happens to make me more unwell.”

“It’s been a courageous journey that she has been on,” he said Thursday. “I think that debate will go on and it will happen at the national level and she will have been a major voice in that conversation that I’m sure Canadians are going to have. ”

In Ottawa, federal Health Minister Ginette Petitpas Taylor said the issues Parker raised will be considered in a report being drafted by a panel of experts, which is due by the end of the year.

“It’s a very sad situation for Miss Parker and my heart goes out to her and her family,” she told reporters Thursday.

“If I would have had the authority and the power to give a specific exemption to her in her specific case, I would have been pleased to do so we don’t make a law for one person.”

She said the panel is looking at several issues around the assisted death law, and the government wants to get them right.

In her final Facebook post, Parker asked people to send emails or texts to their member of Parliament to encourage them to amend the law to help people in her category, which she described as “assessed and approved.”

“For those already assessed and approved for (medical assistance in dying), they should receive the opportunity to figure out when the right time to die is upon them,” Parker wrote. “They will figure it out as they live out as many days as possible.”

She said the decision by Canada’s lawmakers to add late-stage consent to the legislation was a “cowardly act that completely ruined the process for people like me who are dying.”

Parker said the law should be changed to allow for so-called advance requests for those who have already been approved for a medically assisted death. These instructions would allow caregivers to administer lethal drugs even if their patient is unable to give consent.

Parker said she had been working with Dying with Dignity Canada to continue a campaign to change the law.

A spokesman for the advocacy group said it was committed to removing a barrier to people’s rights.

“As an organization, we want to make sure that no one who has been assessed and approved for assisted dying has to face the same cruel set of choices that Audrey has faced,” said Cory Ruf, spokesman for Dying with Dignity Canada.

“No one should be forced to die earlier than they would like to or forgo proper pain care to access their right to a medically assisted death.”

Assisted death, but not on her terms: Audrey Parker is bent on changing Canada’s late-stage consent rule – if only posthumously
November 1, 2018 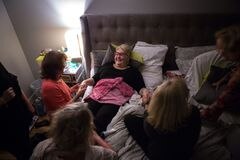 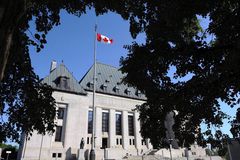