The federal New Democrats face a number of political challenges as they prepare for an election that is now a year and a half away. But a top issue is money: They don’t have much.

Still crawling out of debt after the 2015 vote, the NDP is struggling to raise the funds it needs to mount a competitive campaign in 2019.

Donations are down. Donors are down. And, despite the optimistic air of leader Jagmeet Singh, there is nothing to suggest a change in financial fortune is on the horizon.

In 2017, the NDP managed to raise less than $5-million from individual contributors. Compare that to 2011 when the per-vote subsidy, which was phased out by the Conservatives, meant the party started with more than $7-million before raising a single dollar.

“The last three years weren’t easy,” party president Mathieu Vick said in a telephone interview on Tuesday. There were two national conventions and a leadership race that became necessary when the party voted to replace Tom Mulcair, said Mr. Vick, and those events cost money.

“It’s going to be hard to be in as good a shape as we were when we had the per-vote subsidy, and I think that’s pretty clear,” he said. “But we have targets, we had a good first quarter and we’re just trying to build off that at this point.”

In the first quarter of 2014, the year before the previous election, 21,748 donors gave a total of $2,519,647 to the federal NDP. So, over the past four years, the party’s fundraising has been nearly cut in half and it has shed a quarter of its donors.

As party treasurer Tania Jarzebiak told a national convention in February, “there is no doubt that it has been difficult to adjust our $15-million-a-year appetite to the reality of revenues being reduced by more than half.”

Ms. Jarzebiak and the rest of the NDP executive have set a revenue target of $10.5-million for 2018. But, even if the remaining quarters are more lucrative than the first, that would appear to be ambitious.

Instead, the NDP will have to borrow that money. Without assurances that it can be paid back before a subsequent election, it may be difficult to obtain a loan at a competitive rate.

Mr. Singh was elected to lead the party in the fall of last year, in part on his ability to raise funds for his leadership campaign. But it is not at all clear that the people who donated cash to help him become leader will continue to contribute to the NDP itself.

Meanwhile, the NDP vote dropped to 9 per cent in the Chicoutimi-Le Fjord by-election on Monday, raising concerns about whether the party will be able to keep its 16 seats in Quebec in the federal election.

And there are other problems, inherent in the NDP’s political nature, that could be difficult to overcome.

Alex Marland, a political science professor at Memorial University in Newfoundland who has studied political fundraising campaigns, points out that emotion provides a major impetus for donations.

“You need to get people upset and angry,” said Mr. Marland. “The Liberals being positioned a lot of the time on the political left means it’s hard to get people who support the NDP really angry.”

Peter Graefe, a political science professor at McMaster University and fellow at the Broadbent Institute, said, as a social democratic party, the NDP promotes values that are not traditionally shared by wealthy donors who have money to give to an election campaign.

It’s obviously easier “to get 70 cheques of a thousand bucks from lawyers and accountants and business people than to bundle together a bunch of hundred dollar cheques,” said Mr. Graefe.

Mr. Vick agrees with that analysis.

“One of the reasons that we don’t fundraise as well as the Liberals or the Conservatives is that our policies really don’t cater well to the one per cent,” he said. “But for sure we need money in the coffers if we want to run a good election in 2019.” 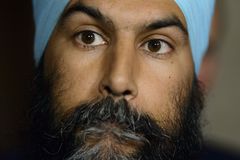