Prime Minister Justin Trudeau and his newly shuffled cabinet gathered Tuesday for a retreat on Vancouver Island, under smoke-filled skies amid a province-wide wildfire emergency.

Ministers are to discuss plans for the fall sitting of Parliament, including proposals to beef up measures aimed at protecting Canadian elections from foreign interference.

But Trudeau’s first order of business was to meet with British Columbia Premier John Horgan, who had toured one of the hardest hit areas in the northern part of the province earlier in the day with federal Defence Minister Harjit Sajjan.

“I want to start by saying, obviously, our thoughts are with all the first responders, the firefighters and the residents who are struggling through the wildfires that are raging across the province,” Trudeau said during a brief photo op at the start of his meeting with the premier.

Trudeau is planning to take time out from the cabinet retreat on Thursday morning to personally meet with firefighters and evacuees in Prince George.

“As a born and raised Vancouver Islander, I was racking my brain trying to think of the last time a federal cabinet would have come to hold a meeting here and I can’t remember it ever happening,” Horgan said.

“So, it’s a delight to have the prime minister and his team here.”

Horgan also praised the federal government’s response to the wildfires. Seeing different levels of government working together on the crisis, “I think gives comfort to the public that federal, provincial, municipal, Indigenous leaders all coming together, speaking with one voice about the courage of our first responders and the tragedy that’s hitting families and people throughout British Columbia.”

He noted that this is the second consecutive summer that B.C. has declared a state of emergency, an unprecedented situation that “speaks to the challenges of climate change, which again are values that we share” with the federal government.

Multiple federal departments and agencies, from Environment Canada to the armed forces, are involved in helping B.C. cope with the crisis. And Trudeau has now created a special ad hoc committee of cabinet to ensure that all federal actors are pulling together in the same direction, Public Safety Minister Ralph Goodale said.

Trudeau said he and Horgan would also discuss how their two governments are working together on infrastructure projects, housing and protecting wild salmon, “something that is iconic and essential to B.C.’s culture and to B.C.’s economy.”

Neither he nor Horgan mentioned the one big issue on which their governments vehemently disagree – the Trans Mountain pipeline expansion project to carry Alberta bitumen to tidewater in Burnaby, B.C.

The Trudeau government has decided to purchase the pipeline from Kinder Morgan, which backed out last spring, citing continued uncertainty that the project would ever go ahead given the B.C. government’s determination to use every avenue possible to stop it.

Dominic LeBlanc, appointed last month to the newly created portfolio of intergovernmental affairs, said the two leaders briefly discussed the pipeline during their private meeting. But he said they concentrated on issues on which the two governments are in agreement.

The pipeline dispute could still come up Wednesday, when Horgan is to attend part of the cabinet retreat.

Democratic Institutions Minister Karina Gould, meanwhile, confirmed that cabinet will consider proposals to strengthen Bill C-76, omnibus legislation governing election rules that was introduced last spring. In particular, she said the government is contemplating ways to ensure foreign money is not involved in trying to influence how Canadians vote.

“We have to look very carefully at C-76,” Gould said in an interview.

“We’re certainly thinking about is C-76 robust enough to deal with the issues that are confronting us. I would say that in many ways it is but there are some things that have been pointed out, that’s what we’re looking at.

During the retreat, ministers are to hear from a number of experts in cyberthreats to elections.

Ahead of the retreat, Conservative MP Ed Fast issued a statement accusing the Trudeau cabinet of ignoring the most pressing issues facing the country, focusing instead on “how they can further manipulate election rules to benefit the Liberal Party of Canada in the next election.”

But Gould noted that the Conservatives themselves have criticized C-76 for failing to do enough to cut off the use of foreign money in elections.

“In direct response to some of the things the Conservatives have been talking about with regards to foreign funding in elections, we’re taking a closer look at that to see if there are indeed any loopholes and what we could do to close those,” she said.

Gould dismissed Fast’s contention that the Liberals are trying to rig the rules in their favour for next year’s election.

“We will examine that proposition very carefully, both in terms of effectiveness and fairness,” Goodale said. 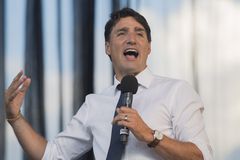