Say, did anyone notice that Justin Trudeau’s government just poured a chunk of money into making employment insurance more generous in Liberal-dominated regions – temporarily, until after the 2019 election?

The announcement of a $189-million EI pilot program for seasonal workers garnered little attention in most parts of the country.

But it’s worth a second look, both because of the way it will work and because it is convenient that this politically expedient program will get a temporary life in the 20 months around an election.

It will make benefits more generous in 13 regions with high proportions of seasonal work – and it just so happens that 34 of the 54 ridings affected are held by Liberals.

In some ways that’s not odd. The Liberals hold the majority of seats, and have higher proportions in Atlantic Canada and Quebec, where there are more seasonal workers. But that’s also why this EI pilot program might help ensure the employment of Liberal MPs.

EI isn’t the political hot potato it once was, but Liberals with long memories will recall that Jean Chrétien’s government tightened eligibility requirements and benefits for seasonal workers – and lost half their Atlantic Canada seats in 1997.

Unemployment is lower now, but that caused a new complaint – the so-called “black hole.”

When the unemployment rate goes down in a particular EI region, seasonal workers there need to work more weeks to qualify for EI, and get fewer weeks of benefits. If one works 26 weeks in a region with 11-per-cent unemployment, one might qualify for benefits for the other 26 weeks of the year. But if regional unemployment falls to 9 per cent, they might get 22 weeks – leaving four weeks with neither a paycheque nor EI.

That’s intentional – EI is supposed to be less generous when there are more jobs, as an incentive to find year-round work. But seasonal workers lose benefits, and complain about the “black hole.”

So the Liberal government last week announced the “pilot project” to extend benefits up to five weeks in 13 EI regions where seasonal workers make up more than 4 per cent of the labour force, and where unemployment was above the national average in 2017.

It’s a pilot project because it’s not permanent. It starts this month, slightly more than a year before the 2019 election, and ends about six months after voting day.

The map of affected areas suggests why the Liberals had the political will to act.

Seven of the 13 EI economic regions that will see expanded benefits are in Atlantic Canada; they essentially cover the whole region and most of the major cities. The Liberals hold every seat in the region.

With the exception of Yukon – a Liberal seat – the rest of the EI regions in the pilot program are in Quebec. The ridings affected are held by a mix of parties, but mostly are target battlegrounds for the Liberals. Seven are held by the NDP, whose Quebec support has slid. Several of the nine Conservative ridings saw a deeply divided vote in 2015, and Tories won with a low share of the vote – Bernard Genéreux won Montmagny-L’islet-Kamouraska-Rivière-du-Loup with 29 per cent. (In some cases, like the Beauce seat held by departing Tory Maxime Bernier, the pilot touches just a small part of the riding.)

Is it good policy? It provides income support in areas with a high proportion of seasonal workers – individuals who claimed EI three times in the last five years. But it counters the intended incentives toward full-time work when unemployment is lower.

The pilot will apply in Central Quebec region though unemployment there is now 5.8 per cent. Atlantic Canada fish plants have often complained they can’t find workers. University of Prince Edward Island economics professor Jim Sentance said there can be reasons for that – available work might be in the EI region, but still far from workers. They might lack skills. Many in PEI who receive seasonal benefits might otherwise be on welfare, he said. “A section of the employment insurance program has become an income support program,” he said.

Do the Liberals believe in it? They’re only willing to create a pilot program, until six months after the next election. It seems politics made them believers. 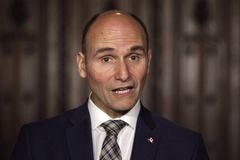