John McCallum, who was fired as ambassador to Beijing for public comments on the Canada-China dispute that the Trudeau government said were out of step with official policy, made similar remarks in private to business leaders weeks earlier, sources say.

Opposition critics and a former diplomat say this suggests Mr. McCallum had not gone off script, but was communicating a consistent message that must have been approved at some level.

On Jan. 11, two weeks before he was fired as Canada’s ambassador to China, Mr. McCallum told Canadian business executives in Toronto that the U.S. legal case against detained Huawei executive Meng Wanzhou was weak and expressed hope that Washington would withdraw its extradition request as part of a trade deal with China, sources say.

During the event, Mr. McCallum also revealed that Canadian Robert Schellenberg, whom China had accused of smuggling drugs, might be given a death sentence. Three days later, news broke of Beijing’s decision to sentence Mr. Schellenberg to death after a one-day trial.

Mr. McCallum’s comments in an off-the-record round table organized by the Canada China Business Council (CCBC) left participants with the strong impression he was stating government policy. A Global Affairs official accompanied the envoy to the event at the Toronto law offices of Osler, Hoskin & Harcourt LLP, sources say.

He made the same remarks in public to Chinese-language journalists in Canada on Jan. 22 – statements that opposition parties condemned but the Chinese government hailed as evidence the arrest of Ms. Meng was politically motivated.

A thorny road lies ahead for Canadian-Chinese relations

Canada must reassess its approach to China – if not, we may get steamrolled by the world’s new juggernaut

Explainer: John McCallum’s firing and the aftermath: The story so far

Prime Minister Justin Trudeau fired Mr. McCallum on Jan. 25 after he publicly expressed hope that the United States would drop its request for the extradition of Ms. Meng, chief financial officer of Huawei Technologies Co. Ltd. and daughter of company founder Ren Zhengfei. The day before, Mr. McCallum had apologized for his remarks, but then told a StarMetro Vancouver reporter it “would be great for Canada” if the United States dropped its extradition request.

Former diplomat Charles Burton, an associate professor at Brock University, said Mr. McCallum could not have been acting as rogue player in his talk to the influential business council, which includes many of the country’s top blue-chip companies.

“Presumably his [speaking] program was at the behest of the government of Canada, especially since he was doing a tour and briefing the cabinet, so it does give the impression the government was trying to give out two messages,” said Mr. Burton, who served as a diplomat in Beijing. “There was the official message to mainstream media and Canadians in general and the other message that seemed to be directed at China-friendly groups such as the Canada China Business Council.”

The Globe and Mail spoke to a number of people who attended the invitation-only CCBC event with Mr. McCallum. The Globe granted anonymity to the sources because they had agreed to keep Mr. McCallum’s comments confidential.

In his talk, the Canadian envoy said he had received a briefing from the federal Justice Department and, reading from notes, recounted what he heard, according to the sources. He told the round table he felt Ms. Meng had good arguments to avoid extradition. He said he hoped the United States would back off its extradition request as part of a trade deal that would also free jailed Canadians Michael Kovrig and Michael Spavor, whom he referred to as “hostages."

China detained Mr. Kovrig, a Canadian diplomat on leave, and Mr. Spavor, an entrepreneur, shortly after Ms. Meng’s arrest on allegations of endangering national security in what is widely seen as retaliation.

Foreign Affairs Minister Chrystia Freeland explained on Monday that Mr. McCallum was dismissed because he made comments “inconsistent with the government of Canada" policy.

Participants at the Jan. 11 event said they believed Mr. McCallum was delivering a message on behalf of the government. He told the audience Ottawa had asked him to come back from Beijing early in the New Year to do outreach in the Chinese-Canadian community and with business executives, and to attend a cabinet retreat in Sherbrooke.

The sources say Mr. McCallum portrayed the Liberal government as sympathetic to Ms. Meng’s case. He told them that U.S. President Donald Trump’s suggestions in mid-December that he might use the Huawei executive as a pawn in trade talks with China would benefit her case before a Canadian court.

“There was clearly a narrative for public consumption and private consumption, and that is why the Prime Minister stuck by McCallum until it really became untenable for him to do so because of public pressure,” Conservative foreign affairs critic Erin O’Toole said.

“As the minister said, the first and foremost job of any ambassador of our country is to accurately express the government’s position,” said Adam Austen, press secretary to Ms. Freeland.

“Canada respects its international legal commitments, including by honouring its extradition treaty with the United States. The rule of law is fundamental to all free societies, and we will continue to defend and uphold this principle. This is the position of the government.”

A senior Canadian government official, who was not allowed to speak publicly about the Meng case, said Mr. McCallum must have misrepresented Ottawa’s position. The official said Justice Department lawyers have consistently told the Prime Minister’s Office it cannot be make a determination on the merits of the U.S. case until it sees the evidence. It is not clear if the United States provided the evidence to Justice lawyers as part of the formal extradition request submitted on Monday. Mr. McCallum could not be immediately reached for comment on Thursday.

“The central job of an ambassador is to represent accurately the government’s position. John didn’t do that and that is why his position was untenable,” Ms. Freeland told reporters on Monday.

“I never suspected that he was going rogue. His crime was saying out loud what the government was saying to themselves and obviously to key business groups as well,” Mr. Cullen told The Globe.

Ms. Meng was arrested at Vancouver airport on Dec. 1 at the request of U.S. law enforcement on allegations of banking fraud related to violations of U.S. sanctions against Iran.

No reason to believe Canadian detained in Macau tied to dispute with China: Freeland
January 29, 2019 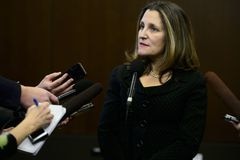 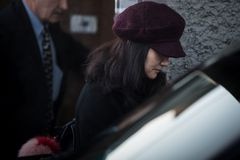