Foreign Affairs Minister François-Philippe Champagne said Tuesday he has repaid two mortgages held by the Bank of China after facing criticism over his financial relationship with the state-owned enterprise.

He explained the move as an effort to put the matter behind him. “To avoid any distractions, both have been repaid in full and refinanced with a Canadian bank,” Mr. Champagne told a parliamentary committee where he was testifying on the government’s response to COVID-19.

The combined mortgages were initially valued at $1.7-million, and the balance owing as of early June this year was $1.2-million.

Mr. Champagne said his indebtedness to one of China’s largest government-owned banks never influenced his work as an MP or minister.

“Neither of these mortgages nor any of my other liabilities have ever had a bearing on my function as a public office holder.”

As The Globe and Mail reported earlier in June, Mr. Champagne had two registered residential mortgages with the Bank of China in London, which opposition party critics said exposed him to “personal financial vulnerability” at a time when relations with Beijing are poor.

The minister defended his conduct on Tuesday, saying that he disclosed the financial obligations to the federal ethics watchdog when he was first elected as an MP in 2015. “Both mortgages have been disclosed to the conflict of interest and ethics commissioner and placed in the public registry since I first entered politics more than four years ago,” he said.

Before entering public life, Mr. Champagne bought two apartments in London – one in 2009 and one in 2013 – while he was an executive with Amec Foster Wheeler PLC, the British multinational construction and engineering giant.

The Bank of China, which is one of China’s largest financial institutions, is a small player in the British residential mortgage market.

Data from UK Finance, a trade association for the British banking and financial-services sector, showed that for 2018, the Bank of China was the 53rd largest mortgage lender in Britain, with a 0.1-per-cent share of the country’s mortgage market when measured by value of mortgages outstanding.

Earlier this month, when asked to explain why he turned to a Chinese bank, Mr. Champagne said back then he faced difficulty securing the type of loan he wanted while living in Britain on a visa.

“At the time I purchased these apartments, the Bank of China (U.K.) Ltd. was one of a very limited number of banks providing residential mortgages for terms of more than 20 years to people residing in the U.K. on temporary worker visas,” the minister said in a statement to The Globe earlier this month.

Back in 2009, Mr. Champagne was named a “Young Global Leader” by the World Economic Forum. That same year, while based in London, he told The Globe and Mail in an interview that he planned to return to Canada and enter politics.

“One day I do intend to come back in the country and seek elected office to serve the nation,” Mr. Champagne said at the time. Asked whether he would be prime minister one day, he replied: “One has to try and if Canadians believe in what I can do, I will certainly give it a shot.”

Relations between Canada and China have been in a chill since late 2018, when China jailed Canadians Michael Kovrig and Michael Spavor in apparent retaliation for the arrest of a Huawei Technologies Co. Ltd. executive on a U.S. extradition warrant. China also restricted Canadian agricultural imports. Sales of canola seed to China – once a major export – remain constrained.

Conservative MP Garnett Genuis, who is also a member of the special House of Commons Committee on Canada-China Relations, said Mr. Champagne did a “strange about-face” Tuesday without acknowledging any possible conflict of interest.

“He never acknowledged that it was a huge problem for our top diplomat to have mortgages with the state-owned Bank of China,” Mr. Genuis said. “It is a big deal … but the disinvestment only happened because of the publicity and criticism.”

Pressed during Tuesday’s House of Commons health committee meeting for more explanation, Mr. Champagne said he decided to refinance the mortgages so they wouldn’t become a political issue.

“The reason I did that is that I think Parliament has other things to do than focus on my apartments,” he said.

Asked by NDP MP Don Davies whether he agreed that having mortgages with a state-run Chinese bank was poor optics, Mr. Champagne replied that he was always transparent about them.

During Tuesday’s hearing, Mr. Genuis repeatedly pressed the minister on whether Canada was prepared to impose Magnitsky-style sanctions on Chinese officials involved in suppression of Uyghur people and Beijing’s clampdown in Hong Kong. The minister did not directly answer but said, “Canada is on the forefront of human rights around the world.”

Mr. Champagne’s reluctance to discuss sanctions against Beijing comes as a group of Conservative senators released an open letter to Prime Minister Justin Trudeau on Tuesday, calling him to impose such sanction under Canada’s version of the Magnitsky Act, a law named after Russian tax expert Sergei Magnitsky who was tortured and died in a Moscow prison after uncovering fraud in Russia.

The law, which Canada, the United States and other Western countries have adopted, allows for sanctions against foreign nationals responsible for “gross violations” of human rights.

“He [Champagne] didn’t answer and it shows a lack of a willingness to genuinely and consistently stand up for issues of human rights in ways that really count,” Mr. Genuis said.

Conservative senators said China’s mass internment of Uyghurs, its mistreatment of Tibetans and its crackdown on Hong Kong freedoms as well as the imprisonment of Mr. Kovrig and Mr. Spavor demand a stronger Canadian response.

“China is continuously showing us that it poses the biggest threat to mankind and a danger to international security,” the senators wrote. “Now more for than ever, the time has come for the government to firmly stand up for these values and take concrete action by imposing Magnitsky sanctions.” 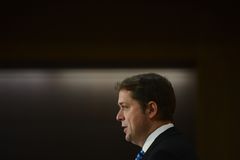 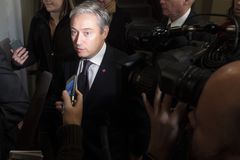