Canada’s national cybersecurity agency says it is “very likely” Canadian voters will encounter foreign cyber influence before and during the fall federal election.

In its latest update on cyber threats to the country’s democratic process, the Communications Security Establishment (CSE) said Monday that political parties, candidates and political staff continue to be “attractive targets.”

The update to the 2017 report issued by CSE is intended to inform Canadians about cyber threats to Canada’s 2019 election.

Targeting voters has become the most common type of cyber threat activity against democratic processes across the world, CSE said, and those threats could mean manipulating information online and using cyber tools, such as malware or phishing, to influence voters’ opinions and behaviour.

“We judge it very likely that foreign cyber interference against Canada would resemble activity undertaken against other advanced democracies in recent years,” the report says.

“Foreign adversaries have attempted to sway the ideas and decisions of voters by focusing on polarizing social and political issues, promoting the popularity of one party over another, or trying to shape the public statements and policy choices of a candidate using cyber tools or social media platforms,” states the report.

The security body said that in 2018 half of all advanced democracies holding national elections were targeted by a cyber threat activity, about a threefold increase from 2015, and CSE expects the upward trend to continue.

In advance of the looming election, CSE officials met with and offered to provide cybersecurity advice to all registered federal political parties, which included guidance on ways to strengthen their networks and systems.

Democratic Institutions Minister Karina Gould told reporters that there is also an onus on social media and digital platforms to protect the “digital public square” by increasing efforts to prevent cyber threats, including the spread of disinformation.

Ms. Gould says the government has been meeting with social media companies but that while discussions are progressing, they have not yielded the results the government expected.

“I don’t have the confidence that they are disclosing everything with us and I think from experiences we’ve seen around the world that there is a lot left to be desired in terms of how seriously they’re taking these issues. We continue to engage with them and continue to have conversations but I’m not feeling great,” she said.

Ms. Gould said that she would like social media companies to be more transparent and share with Canadians what actions they are taking.

Colin McKay, the head of government policy at Google Canada, said Google is committed to “combatting misinformation and working with the Canadian government to fight cyber threats,” in a statement. Mr. McKay said Google Canada has met with Ms. Gould and her staff, Elections Canada and other government officials to discuss its plans on cybersecurity and information.

Mr. McKay said Google Canada published a report in February on how the social media giant is fighting misinformation across its platforms, and in co-ordination with the Canadian Journalism Foundation and CIVIX is funding NewsWise, a program that delivers news literacy lessons to school-aged Canadians.

The report also notes that while elections around the world have continued to be targeted, Canada’s federal elections are primarily paper-based and Elections Canada has legal, procedural and information technology measures that protect against attempts to covertly change the official vote count.

Ms. Gould said it’s important for Canadians to note that because it is a paper based system, and voters go to the polling booth with their pen and pencil that, "we can have a lot of confidence, in terms of the results.”

The report seemed to echo a warning last week from Foreign Affairs Minister Chrystia Freeland who said, “interference is very likely” and that the government believes there has probably “already been efforts by malign foreign actors to disrupt our democracy.” 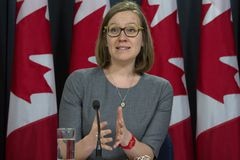 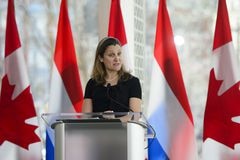