The man who led the multiyear investigation into abuse at Canada’s Indian residential schools says Pope Francis’s refusal to apologize for the harms done to students means the church is still unwilling to account for the crimes of priests, nuns and other Catholic authorities.

Murray Sinclair, an independent senator who spent 5½ years as head of the Truth and Reconciliation Commission (TRC), said the Pope’s response suggests the church does not hold First Nations, the Inuit and the Métis in high regard.

“It’s saying that Indigenous people in Canada are not worthy of his apology,” Mr. Sinclair said in an interview on Wednesday. “I think it also speaks to the continued lack of acceptance of responsibility on the part of the Catholic leadership about what went on in the schools and their responsibility, particularly, for healing.”

Among the 94 calls to action stemming from the TRC’s investigation was a recommendation that the Pope apologize to survivors of the schools, their families and their communities for the Roman Catholic Church’s role in the “spiritual, cultural, emotional, physical and sexual” abuse of the children who attended the schools.

In 2010, a papal apology was issued to Irish victims of sexual abuse and, in 2015, Pope Francis apologized in Bolivia to the Indigenous peoples of the Americas for the “grave sins” of colonialism. So survivors of the residential schools held out hope that their turn would eventually come.

Prime Minister Justin Trudeau, who visited the Vatican last year, asked in person for the Pope to heed the request. But, on Tuesday, it was officially denied.

Lionel Gendron, the Bishop of Saint-Jean-Longueil and the president of the Canadian Conference of Catholic Bishops, said in an open letter to the Indigenous peoples of Canada, that the Catholic bishops had discussions with Pope Francis about the legacy of the residential schools and the suffering that the students endured.

But “after carefully considering the request” for an apology, wrote Bishop Gendron, “he felt he could not personally respond.”

Instead, he wrote, the Pope encouraged the bishops “to continue to engage in an extensive pastoral work of reconciliation, healing and solidarity with the Indigenous peoples.”

Mr. Sinclair said the Pope’s refusal to apologize means Indigenous communities will be even further divided between those who continue to practise their Catholic faith and those who hold negative views of the church.

The apology was important in the view of the TRC, he said, because the Catholic Church is the only church that has not expressed regret for the part it played in the abuse at the schools.

In 2009, Pope Benedict XVI offered his “sorrow” and his “sympathy and prayerful solidarity” to the residential-school victims.

But that is not the same as an apology, said Mr. Sinclair. “It was like a driver of a car indicating that he was sorry that somebody had been injured,” he said, “but not taking responsibility for the fact that he was driving the car that had injured” the person.

Mr. Trudeau also said Wednesday that he was “disappointed” with the Pope’s decision. “We will keep working with communities, keep working with individuals on the path of reconciliation,” he told reporters, “because we know that taking responsibility for past mistakes and asking forgiveness is something that is core to our values as Canadians.”

Perry Bellegarde, the National Chief of the Assembly of First Nations, said his organization will not stop pressing the request for an apology in the hope that the Pope changes his mind. “It’s part of truth telling,” said Mr. Bellegarde. “Before you can really heal, people have to acknowledge the truth in what happened.”

Edmund Metatawabin, a former student of the St. Anne’s Residential School in Fort Albany, Ont., who has worked to obtain compensation for those who were abused, said an apology would have been extremely meaningful for First Nations Catholics who look to the church for support.

On the other hand, he said “for us who are continuing to work against this sexual abuse, it’s disappointing but, at the same time, typical behavior of the Catholic Church to deny the harm they have inflicted on the Indigenous children of Canada.” 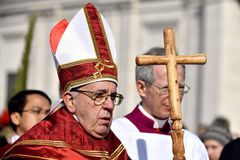