Green Party MP Jenica Atwin is crossing the floor to sit with the Liberals less than two years after her breakthrough election for the Greens in New Brunswick and just weeks after criticizing key government policies.

The defection was announced in Fredericton Thursday at a press conference with long-time Liberal MP Dominic LeBlanc. The move leaves the Greens with just two MPs in the House of Commons.

The news is the latest challenge for Green Party Leader Annamie Paul who does not hold a seat and has had a number of disputes with her own party.

Ahead of a widely expected fall election, Ms. Atwin’s floor-crossing was celebrated by the minority Liberal government but questioned by a former Liberal MP and Jewish organizations concerned over her comments on the Israeli-Palestinian conflict.

Last month, she openly challenged Ms. Paul’s position on the Mideast clash. Some Greens view the Leader’s policies as too soft on Israel.

On May 11, Ms. Atwin said on Twitter that Ms. Paul’s statement on the battle between Israel and Hamas, which called for de-escalation and a return to dialogue, was “totally inadequate.” In a separate post, she said: “I stand with Palestine! There are no two sides to this conflict, only human-rights abuses! #EndApartheid.”

Noah Zatzman, a senior adviser to Ms. Paul, expressed solidarity with Israel in a May 14 social-media post that accused unspecified Green MPs of discrimination and antisemitism. “We will work to defeat you,” he said.

Ms. Atwin told reporters that she left the Greens in part because of that dispute, which she called a distraction. But Ms. Atwin is now joining a party that also doesn’t hold her view on the conflict. She said her comments “still stand.”

B’nai Brith Canada, the Centre for Israel and Jewish Affairs, and former Liberal MP Michael Levitt, who is now president of the Friends of Simon Wiesenthal Centre for Holocaust Studies, all raised concerns.

“I’m disappointed and concerned by the news that MP Jenica Atwin has crossed the floor to join the Liberal caucus, given her inflammatory one-sided and divisive rhetoric during the recent conflict between Israel and the terror group Hamas,” Mr. Levitt said on Twitter.

Mr. LeBlanc said the conversations with Ms. Atwin started in “recent weeks.” He added that in her deliberations, she also spoke with Prime Minister Justin Trudeau and Deputy Prime Minister Chrystia Freeland.

“To the people of Fredericton, this is for you,” Ms. Atwin said Thursday. “I am going where I can do my best work on behalf of my community.”

Ms. Atwin has been highly critical of the Liberals, including over the purchase of the Trans Mountain pipeline, what she calls an “incredibly flawed” plan to change the Broadcasting Act, and the party’s “middle-class obsession,” which she said distracts from widening income inequality. In May, she told the House of Commons that the government’s budget “is just another example of symbolism over substance, where we maintain the status quo under the guise of transformation.”

Asked about the differences between her views and the Liberals, Mr. LeBlanc said that after speaking with Ms. Atwin, he realized “there was a great deal more in common than might be different.”

Reporters in the parliamentary press gallery were not able to ask questions at the Fredericton press conference and Ms. Atwin did not respond to an interview request. At a press conference in Ottawa, Ms. Paul insisted that Ms. Atwin’s defection had nothing to do with her or her aide’s comments.

She said Ms. Atwin’s discussions with the Liberals “pre-date” the May dispute. The Globe and Mail asked Mr. LeBlanc’s office for information about when Ms. Atwin first reached out, but it did not provide the date.

“I have never had anything but incredibly positive things to say about her,” Ms. Paul said.

New Brunswick Green Party Leader David Coon had harsh words for the former Green MP and his federal leader. Ms. Atwin “felt abandoned by her leader,” he said in a Thursday statement, but he also cautioned the newly minted Liberal MP, who he noted voters in New Brunswick elected to represent the Greens.

“She will discover that her principles will not find a home with the Liberals. MPs Jody Wilson-Raybould and Celina Caesar-Chavannes found this out the hard way,” Mr. Coon said.

Ms. Atwin’s triumph in Fredericton in the fall 2019 election was the first victory for the federal Greens outside of B.C. Ms. Atwin narrowly won the seat, with less than 1,000 votes separating her and the second-place Conservatives. Overall, she took 33 per cent of the vote, the Tories 31 per cent and the Liberal incumbent 27 per cent.

Heading into a possible fall election, Nik Nanos, the founder of Nanos research, said his company’s riding-level projections show the Liberals and Greens in a toss-up. To be successful under the red banner, Ms. Atwin will need buy-in from local Liberals as well as some disaffected Green supporters. He also said support from college and university students helped her edge out the Liberals in the past election.

“The big question will be, will those students turn their back on her as a result of moving over to the Liberals.”

With a report from Kristy Kirkup in Ottawa and The Canadian Press. 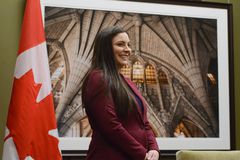