Defence Minister Harjit Sajjan wouldn’t commit to continuing to fund an annual security forum in Halifax that has become embroiled in a controversy over an award it reportedly planned to give to the President of Taiwan.

The Halifax International Security Forum has been staging a conference every fall since 2009 when it was established by the Conservative government’s then-defence minister Peter MacKay. It brings together defence and foreign policy-minded politicians, analysts and pundits from Canada, the United States, Europe and beyond. It’s been called the “Davos of international security” and gets about 50 per cent of its budget from the federal government, a tradition that has continued since the Liberals took power in 2015.

Ottawa, however, has reportedly warned forum organizers it would yank funding if the prize is given to Taiwanese President Tsai Ing-wen, in a move that Politico.com attributed to a fear of offending the Chinese Communist Party.

Beijing considers Taiwan a breakaway province despite the fact that the Chinese Communist Party, which took power in 1949, has never ruled the island. China has been trying to isolate Taiwan from the international community over the past 50 years. Ms. Tsai was re-elected by a landslide last year on a promise of defending the island’s democracy and standing up to China.

According to Politico.com, organizers of the Halifax security forum decided to give its John McCain Prize for Leadership in Public Service to Ms. Tsai. The media outlet said that when Canadian officials learned of the plans, they made it clear Ottawa would pull funding if the prize was given to Taiwan’s President.

Mr. Sajjan has denied he threatened to withhold funding from the forum.

But on Tuesday he also declined to say whether he would continue to fund it. During Question Period, Conservative defence critic James Bezan asked Mr. Sajjan whether he would “guarantee the Halifax security forum will get to keep its funding” and whether he would support the forum giving the McCain prize to Taiwan’s President.

Mr. Sajjan said the forum is an “independent organization and they make their own decisions on where the awards need to go.”

As for future funding, he only said a request would be considered: “National Defence has supported the international security forum in Halifax for the last 10 years and once a request is made it will be considered.”

The Defence Minister, however, had pointed words earlier for the forum’s head office, which is based in Washington and helps recruit U.S. politicians and decision-makers to attend the Halifax event.

He was asked Monday during an appearance before the Commons’ special committee on Canada-China relations whether he thought the forum was useful and whether taxpayers derived a benefit from it.

“I want to make sure you’re talking about the Halifax International Security Forum, not their office that they have in Washington,” the minister said. He later added: “So just the event itself, not the [Washington] office and not the employees or former Conservative staffers that actually work in that office. Is that correct?”

Mr. Williamson confirmed he was asking about the Halifax event itself and Mr. Sajjan said he strongly endorsed the event.

The Defence Minister’s office did not immediately respond when asked to clarify Mr. Sajjan’s remarks about Conservatives working at the forum office.

Peter Van Praagh is founder and president of the Halifax International Security Forum and works in its Washington office. He once served as a policy adviser to Mr. MacKay when he was minister of foreign affairs.

Meghan McCain, the daughter of the late U.S. senator John McCain, criticized the Liberal government this week after reports of the blocked award. “Absolutely pathetic – Canadian government is a bunch of cowards condoning Chinese genocide,” she wrote on Twitter.

The Halifax forum declined to comment on the controversy, including whether Ottawa threatened to pull funding over the McCain award. But it did acknowledge it was happy Mr. Sajjan has recognized its independence.

Vice-president Robin Shepherd said the forum was pleased that Mr. Sajjan said this week that “the government of Canada will not interfere with our choice of whom to recognize with the John McCain Prize for Leadership in Public Service.”

The 2020 recipient of this award has not yet been made public and Mr. Shepherd said the forum still intends to announce a winner.

He said Ms. Tsai would be a good choice.

“It is worth repeating that President Tsai of Taiwan is a well-respected leader, the first female president of Taiwan, and a strong global advocate for democracy. She is an ideal candidate for our flagship award.” 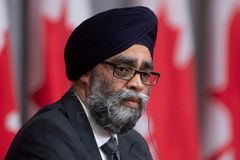 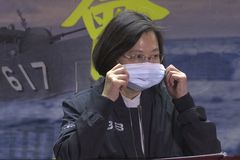 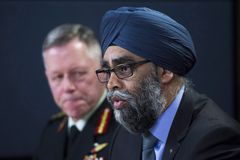