Looking back on his time in federal politics, Paul Calandra admits he would have done things a little differently.

In 2014, the former parliamentary secretary to Prime Minister Stephen Harper gave a tearful apology in the House of Commons after he was criticized for answering questions about the Iraq mission from then-NDP leader Tom Mulcair – by repeatedly attacking the New Democrats’ position on Israel.

“It’s no secret that I’ve made mistakes,” Mr. Calandra recently told The Globe.

“It took me about 2½ years to figure out that the opposition weren’t my enemy and that I could actually work with some of them on the other side of the House.”

It’s a lesson the former federal Conservative MP will bring with him to Queen’s Park when he starts his second life in politics: as an Ontario MPP in premier-designate Doug Ford’s Progressive Conservative government.

Mr. Calandra is one of four former MPs from Mr. Harper’s government, along with six former federal Tory staffers, who won seats in this month’s Ontario election. He said he decided to run again because, after losing in the 2015 federal election, he wanted to replicate the work Mr. Harper’s government did on the provincial scene.

“I’m a big geek that way. I just absolutely love the cut and thrust of political life,” Mr. Calandra said.

Mr. Rickford, elected to the northwest Ontario riding of Kenora-Rainy River, won the only PC riding in a sea of NDP orange. He is viewed as a strong contender for Mr. Ford’s cabinet.

“Having members who have served in government is … a real asset,” Mr. Rickford said.

“You can’t underestimate the value of the politician who has that experience … and what their perspective is on how a lot of the machinery of government is set up and how it works.”

“Ford certainly benefited from having a bunch of candidates and a bunch of campaign volunteers and staffers who got their training in Stephen Harper’s regime,” said conservative strategist Chad Rogers, a partner at public affairs agency Crestview strategy.

“The discipline of what it was to be a professional under Harper trained a generation of awesome campaigners both on the staff side and the elected side.”

Staffing for Mr. Ford’s office is currently under way. Mr. Teneycke said he is returning to his private sector job in digital marketing and Mr. Delorey told The Globe he prefers to run campaigns rather than govern; it is not known yet if Ms. Lantsman will stay on; Ms. Byrne, who is said to be playing a behind-the-scenes role in transition, is expected to join Mr. Ford’s team in a senior role at Queen’s Park. She did not respond to a request for comment.

Mr. Ford’s strong majority is also expected to draw current and former Conservative staffers working in Ottawa who may have left politics after Mr. Harper’s loss in 2015.

“There are all kinds of linkages between folks at the provincial level and the federal level, and people move back and forth all the time,” Mr. Teneycke, who also worked at Queen’s Park for former PC premier Mike Harris, told The Globe. “Politics is a small world, and conservative politics even smaller.”

Editor’s note: An earlier version of this story had Stephen Lecce’s title wrong. This is the corrected version. 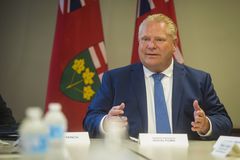 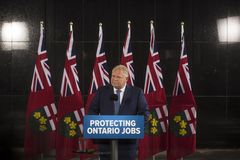