The Queen announced Monday that the Duke and Duchess of Sussex plan to spend part of the year in Canada. Very nice for them, I’m sure, but there are laws in this country. If the Sussexes want to live here, they’ll have to apply. If they’re smart, Meghan will be the one filling out the forms.

Richard Kurland, a Vancouver immigration lawyer, has been considering their case. If the royal couple wish to live in Canada, he says, Meghan would qualify for permanent resident status under the cultural activities component of the Self-Employed Persons Program.

“She would be the principal applicant,” Mr. Kurland said Monday in an interview. “Her spouse would be the accompanying dependent," along with their son, Archie. Meghan lived in Canada while filming Suits, a television program, so her application would doubtless be viewed favourably.

With Harry as the principal applicant, the path would become more difficult. The Express Entry program gives preference to younger applicants with work experience in Canada. At 35, he is a bit old, and has not worked here. Neither can he provide a degree or diploma from an accredited Canadian university or college. The immigration law firm of Green and Spiegel calculates that, under Canada’s points system, Prince Harry’s score “is not competitive for an invitation to apply at this time.”

In any case, he would have to fill out the necessary forms and take a language test in English or French.

Immigration Minister Marco Mendicino has the power to grant anyone permanent resident status, but that power is rarely used and the royal couple have no obvious case to make, since constitutionally they have no special status in Canada, thanks to changes to the rules regarding royal succession.

In 2011, the British government and those Commonwealth governments in which the Queen is head of state decided to abolish male primogeniture. The Duchess of Cambridge’s first child would be next in the royal line of succession after Prince Charles and Prince William. But with male primogeniture in force, as it then was, if the child had been a girl any younger brother would have jumped ahead of his sister, which is just not on in this day and age.

So the Westminster Parliament and other realms changed the rules to make the royal succession gender neutral. In Canada’s case, in order to avoid having to amend the Constitution (because we all know what that’s like), the federal government argued that we simply recognize the monarch of the United Kingdom as the monarch of Canada. In October, the Quebec Court of Appeal agreed, striking down a constitutional challenge. There is no uniquely Canadian law of succession.

“He is not a Canadian Prince or Duke," said Philippe Lagassé, a political scientist who specializes in constitutional issues at Carleton University. “They’re British subjects in line to the British throne.” Constitutionally, as far as Canada is concerned, Harry is just a bloke from Britain.

As British citizens, the Sussexes are, of course, welcome to visit Canada as often as they wish. But they can’t put down roots here. Making their home in Canada or getting a job here could earn them a stern invitation to meet with a border agent, who might well order them out of the country.

So when the Queen said in her statement, “these are complex matters for my family to resolve,” she doubtless was referring to Canada’s immigration policy.

We are one of the most welcoming countries in the world. The immigration target for this year is 341,000 permanent residents, slightly less than 1 per cent of the country’s population. Half the population of the Greater Toronto Area was not born in Canada, so if the Sussexes settled there, they would fit right in.

But nothing annoys Canadians more than people who try to jump the immigration queue. And while we can empathize with people fleeing impoverished or violent countries in search of the better life, the only persecution Harry and Meghan have to endure is from the British press. In any case, as a designated safe third country, citizens of the United Kingdom would typically not qualify as refugee applicants.

That said, if Harry and Meghan and Archie need help coming to Canada, “it would be an honour for me to handle their case,” Mr. Kurland said. “I would do it pro bono.”

The Sussexes should consider this generous offer. Because if they plan on staying in Canada, they’re going to need a good lawyer.

Harry and Meghan, and why members of the Royal Family can’t live in Canada
January 14, 2020 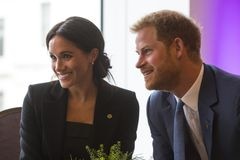