Perhaps the most controversial part of the pitch for the new highways Ontario’s Progressive Conservatives want to build is that they would be good for the environment.

If the notion doesn’t immediately compute – how can a big strip of asphalt be green? – the party has a ready answer. By doing away with bumper-to-bumper traffic, its leaders say, the new infrastructure will lead to less pollution from idling.

However, scientific research has shown that not only would new highways not reduce greenhouse-gas emissions, but even building them can carry a carbon hit equivalent to a vehicle idling for thousands of years.

With climate change an accelerating concern, and the province committed to cutting emissions, opponents of the highways say they would take Ontario in the wrong environmental direction by encouraging longer car trips.

Once in office, the Progressive Conservatives dusted off two highway proposals that had been shelved by the previous government.

One, the 59-kilometre Highway 413, stretches across the northwest portion of the Greater Toronto Area. This proposed highway would run through the Greenbelt protected area, extending from the Highway 401/407 interchange in the west to Highway 400 in Vaughan.

The other big proposal, the 16-kilometre Bradford Bypass, would connect highways 400 and 404 in Simcoe County and York Region. 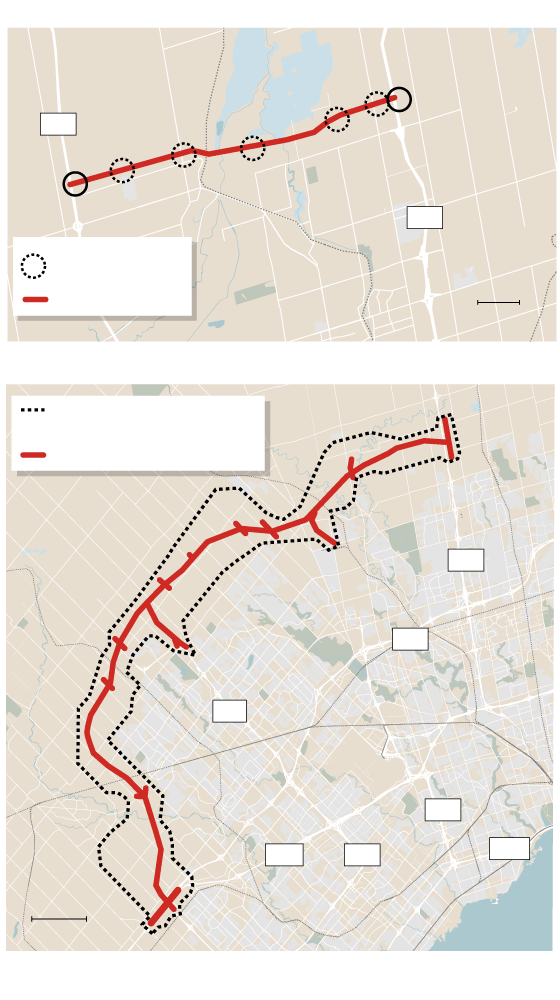 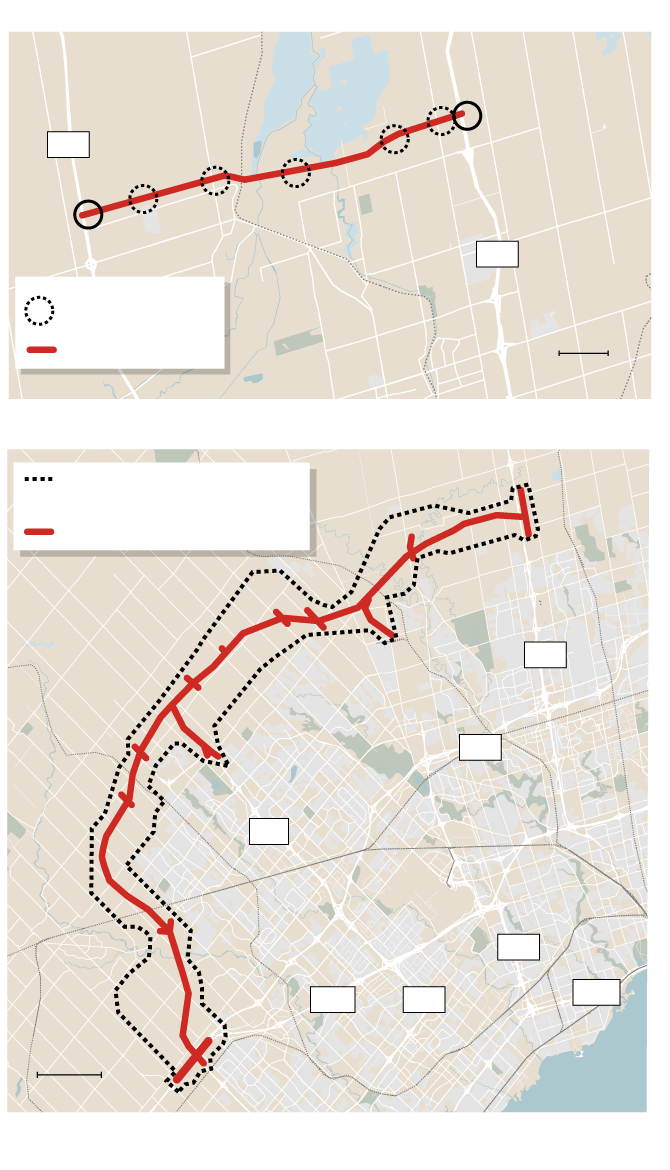 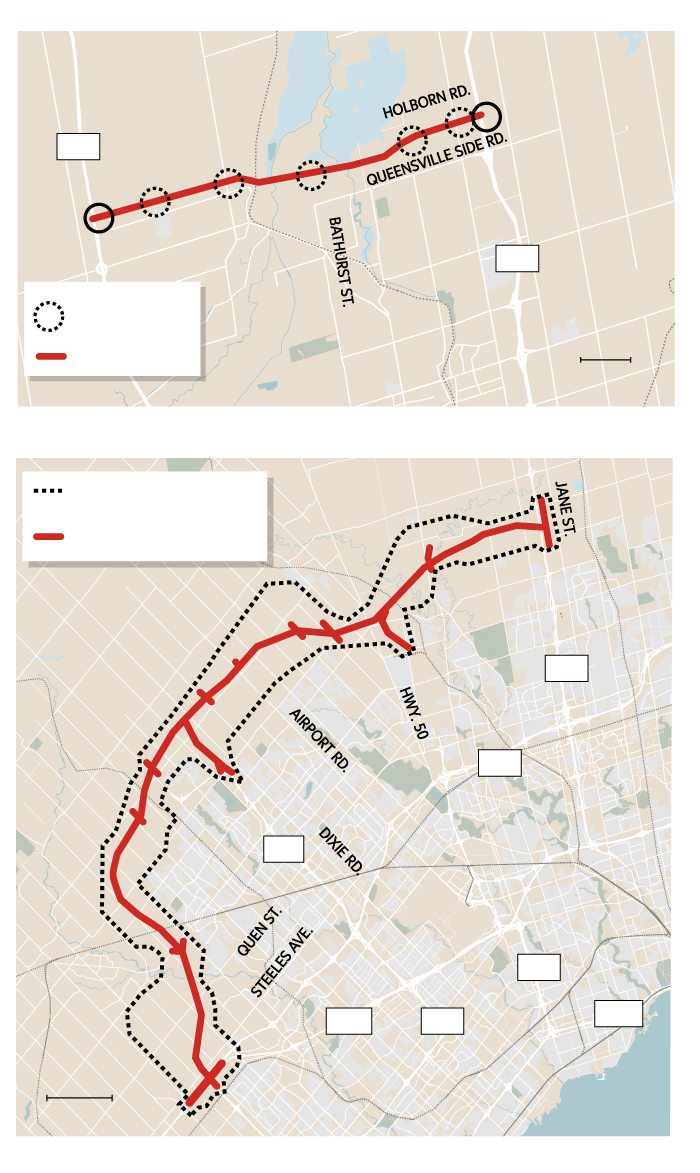 “Reducing gridlock on existing highways also means less greenhouse-gas emissions from commuters stuck in traffic,” Christine Elliott, who has served as deputy premier the past four years, states on her legislative webpage.

However, Shoshanna Saxe, an assistant professor in the department of civil and mineral engineering at the University of Toronto, notes the environmental degradation inherent in highway construction. She pointed to U.S. research indicating that building a kilometre of four-lane highway generated approximately 5,500 metric tonnes of greenhouse gases.

She cautioned that this figure was indicative rather than exact, saying that it is for a road on the surface and doesn’t take into account extra features such as bridges, interchanges or tunnels – all of which would magnify the impact. Still, extrapolating from that figure, building the 75 kilometres of new highway could together be expected to produce at least 413,000 tonnes of GHGs.

By comparison, idling a three-litre engine for an hour produces the equivalent of just over four kilograms of GHGs, according to Natural Resources Canada. Which means that a driver would have to idle for about 11,375 years to match the impact of building the two highways.

While there is some progress toward greener highway construction, Prof. Saxe said such methods are not in widespread use and are unlikely to be employed for these Ontario projects.

“Anything we build or make is going to have an environmental impact,” she said, “but construction materials have an irreducible one because of the chemical processes, that we use to make steel and concrete and asphalt, release greenhouse-gas emissions just through making them.”

The environmental impact of transportation has been receiving increased attention in recent years around the world. In some jurisdictions, major infrastructure decisions are being viewed through a lens that includes the planet’s health.

In Austria, which aims to be carbon neutral by 2040, Agence France-Presse reported in December that the government was cancelling eight highway projects. And in April, U.S. regulators approved a railway merger in part because it would get trucks off New England roads.

As for the argument that the new roads will be environmentally beneficial by cutting congestion, an academic in Quebec City who studies urban transportation and sustainable development called the idea laughable.

“It’s very, very sad to see that the government is not better informed by the Ministry of Transportation,” she said. “To say that the emissions is offset by less traffic it just shows how, I don’t know, I’m like, there’s a lack of words. It’s hypocritical, it’s absurd, it’s ignorant, it’s crazy.”

A study published in 2012 found that more road capacity produces more pollution, because the promise of easier driving makes more people do so.

“In the long run, capacity-based congestion improvements … can reasonably be expected to increase emissions,” the authors write in the journal Transportation Research.

The advocacy group Environmental Defence has studied the 413 and predicts a massive increase in driving if it is built. Its report says that vehicles using the highway would produce 17.4 million tonnes of carbon dioxide equivalent by 2050.

“We need to be planning for a transition and that cannot include new megahighways, which will only increase transportation emissions, and instead we need to be building transportation systems that are low-emitting, that are accessible to all residents and that will provide healthy, complete, sustainable communities.”

Ontario election today: NDP, Liberals, Greens promise to repeal cap on public sector wage increases
May 27, 2022
Doug Ford is most trusted Ontario party leader on economy, polling suggests
May 26, 2022
Vote of Confidence: The biggest climate policy promises on the table for Ontario
May 19, 2022