A Hong Kong activist and other advocates for greater democracy in the semi-autonomous region are visiting Ottawa this week to urge Canada to enact Magnitsky-style sanctions against Hong Kong and mainland Chinese officials responsible for human rights violations since civil disobedience erupted in June.

Mass protests for greater democracy and autonomy have rocked Hong Kong for more than five months, with escalating violence and fears that China will ratchet up its response to end the unrest.

Joey Siu, a vice-president with the student’s union at City University of Hong Kong who has taken part in the months of protests, is meeting with Canadian MPs, senators and officials at the Department of Global Affairs this week. She is accompanied by members of Hong Kong Watch, a U.K.-based civil liberty watchdog.

“Hongkongers are paying a huge price in our fight for freedom, autonomy and democracy: thousands of arrests, life-threatening injuries, a breakdown in trust in our system of government and the ensuring despair,” Ms. Siu told MPs and senators gathered to hear her speak. “We are in urgent, desperate need of support from the international community.”

Hong Kong Watch, whose Canadian representatives include trustee Aileen Calverley, is also calling on Canada’s House of Commons and Senate to conduct hearings on the protests in Hong Kong. In Canada’s minority Parliament, opposition parties gain greater sway over committee hearings and Conservative MP Garnett Genuis said he hopes the Conservatives will be able to team up with other parties to hold Commons hearings on Hong Kong.

British Columbia MP Kenny Chiu, who represents a Vancouver-area riding for the Conservative Party, offered his support for Ms. Siu in a video message from Hong Kong Wednesday where he volunteered as an election observer for local district votes that produced a landslide victory for pro-democracy candidates.

He argued that the Hongkongers are fighting for values that Canadians share: “the pursuit of happiness, justice, peace, freedom of speech, thought and freedom of the press” and that Hong Kong is a “wounded city, in distress" right now that needs Canada’s help.

“Hong Kong and Canada are joined together in history. Hundreds of Canadians gave their lives defending Hong Kong" in the Second World War, he said.

Canada has already passed the Sergei Magnitsky Act, named after a murdered Russian whistle-blower, that allows Canada to impose asset freezes and travel bans on human-rights abusers around the world.

Foreign Affairs Minister François-Philippe Champagne’s office did not directly answer when asked whether Ottawa would impose sanctions on Hong Kong leaders. Instead, press secretary Adam Austen said: “Canada is very concerned by the situation in Hong Kong and, in particular, the recent rise in violence … Minister Champagne raised this issue directly with his Chinese counterpart at the G20 meetings in Nagoya, Japan, this past weekend. It is crucial that restraint be exercised, violence rejected, and urgent steps taken to de-escalate the situation.”

Last week the U.S. Congress passed legislation to back protesters in Hong Kong and threaten China with possible sanctions.

China’s new ambassador to Canada has already warned that any effort by Ottawa to emulate U.S. legislation that paves the way for sanctions against Hong Kong officials will cause “very bad damage in our bilateral relationship,” Envoy Cong Peiwu said last Friday: “We are firmly opposed to any foreign interference.” 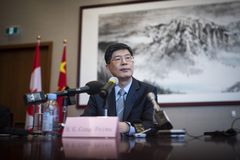 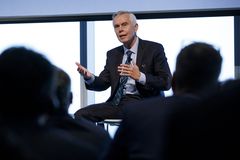 Trudeau, Scheer have little to offer in way of help to Hong Kong residents who fear for their safety
September 17, 2019 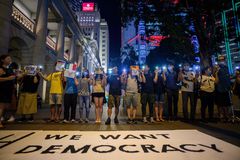