Two Hong Kong legislators with significant Canadian ties were among 12 pro-democracy candidates recently stripped of the right to run for office in the former British colony as the Beijing-led crackdown on opposition and dissent continues.

Both Dennis Kwok and Alvin Yeung are former Canadians who relinquished their citizenship to enter public life in Hong Kong. Mr. Kwok was first elected to the Hong Kong Legislative Council in 2012 and Mr. Yeung in 2016.

On July 30, the two men were barred from seeking re-election in September by Hong Kong administrators in decisions that officially questioned their allegiance to Hong Kong, a region that Britain handed over to China in 1997.

Both Mr. Kwok, who was born in Edmonton, and Mr. Yeung, who attended high school and university in Ontario, say that because of Beijing’s new national-security law, they’re now unable to speak freely to journalists about what countries such as Canada might do to help salvage the civic freedoms that China had promised in a 1984 treaty would remain intact.

The pro-democracy camp had expected to make big electoral gains after a public backlash against Beijing’s crackdown. Shortly after the dozen candidates were barred, however, Hong Kong Chief Executive Carrie Lam announced that the Sept. 6 elections would be postponed for a year, citing concerns about COVID-19. Beijing will soon decide whether those candidates already sitting as legislators will be allowed to remain in office for the extra year.

Explaining their reticence to discuss possible foreign diplomatic assistance for Hong Kong now, the two legislators point to the far-reaching June 30 law imposed on the region – legislation that punishes what Beijing considers secession, subversion or collusion with foreign forces with up to life in prison.

“When you ask me what Canadians should do, I cannot answer the question at all,” Mr. Kwok, 42, a member of Hong Kong’s Civic Party, said in an interview.

“I can’t suggest what Canada might do or what actions to take because it would be completely illegal. They would come after me tomorrow. There would be arrests.”

The same goes for Mr. Yeung, 39, who is the leader of the Civic Party. “I am not at liberty to comment,” he said.

So far dozens of Hong Kongers have been arrested under the new law, which has had a chilling impact on dissent.

Mr. Kwok and Mr. Yeung are evidence of the strong connection between Hong Kong and Canada.

Mr. Kwok and Mr. Yeung are not that different from many Canadians today.

One cheers for the NHL’s Vancouver Canucks, the other, the NBA’s Toronto Raptors.

Mr. Kwok said he relishes swimming in British Columbia lakes each summer when he returns to visit family and friends.

Mr. Yeung counts former prime minister Pierre Trudeau as one of his heroes and talks of how much he misses Tim Hortons double-doubles and Timbits.

Each speaks of the example that Canada sets for the world: a liberal democracy protected by rule of law and a free press.

Mr. Kwok, a lawyer, said he still admires the Canadian system. “For me, it’s the model government anywhere in the world.”

Mr. Yeung concurs. “I understand Canadians have many complaints. It’s not perfect. But still, it’s a place where people can discuss and choose. It has respect for human rights and respect for diversity.”

Neither have plans to give up and return to Canada however. Mr. Yeung’s mother retains her Canadian citizenship and Mr. Kwok has immediate family in Canada. “One doesn’t want to leave until it really becomes unbearable,” Mr. Kwok said. He said he believed he had given the job “honour and dignity” and said he was sure “others will come to take up the baton.”

Mr. Yeung reaches for a metaphor familiar to Canadians. “We are now in the middle, or perhaps just the beginning, of a long winter; but if we stay united, we can survive this.”

Their disqualification raises serious concerns about the future of political opposition in Hong Kong. Chris Patten, the last British governor of Hong Kong, last week called the barring of the 12 candidates “an outrageous political purge.”

Both Mr. Kwok and Mr. Yeung are considered moderates in Hong Kong. Neither have advocated for independence. This past April, however, the Chinese government offices responsible for overseeing Hong Kong lashed out at Mr. Kwok, accusing him of stalling tactics to hold up government business and singled out his opposition to a new Beijing law that criminalized mockery of China’s national anthem.

In barring their bids for re-election, authorities cited their contact with U.S. lawmakers behind the passage of a bill to penalize Hong Kong for human-rights abuses committed during a year of democracy protests – even though this contact occurred before the passage of the new national-security law and despite the fact that both men said they would not urge foreign governments to enact sanctions.

Authorities also cited their stated intent to vote against government legislation until the “five demands” of democracy activists were met, including universal suffrage.

Steve Tsang, director of the China Institute at the University of London School of Oriental and African Studies, said the future for those barred from running for office in Hong Kong is difficult.

“If they do not leave Hong Kong or learn to support the state security law or the Chinese government, they can look forward to sustained harassment and eventually long jail terms,” Prof. Tsang predicted.

He said Western governments will have to come up with creative ways to show support for Hong Kongers in a manner that doesn’t end up hurting Hong Kong people.

“Hong Kongers are now effectively used as human shield for Beijing’s transformation of Hong Kong in violation of the Sino-British Joint Declaration and the Hong Kong Basic Law,” he said.

“I hope the government of Canada will find an imaginative way to show Beijing its disapproval.”

Hong Kong delays election by a year due to rise in coronavirus cases
July 31, 2020 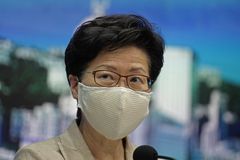 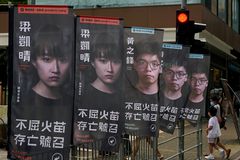 Hong Kong may postpone election amid fears of a coronavirus resurgence
July 29, 2020 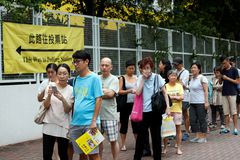