The House of Commons approved a Conservative motion calling on the Auditor-General to audit the Liberal government’s $188-billion infrastructure program.

The motion was approved Wednesday in a 166-152 vote that followed a day of debate Tuesday. The Liberal government said it supported the request for an audit, but voted against the motion because of wording that criticized its performance on the file.

The Bloc Québécois, NDP and Green Party voted with the Conservatives, as did Liberal MP Nathaniel Erskine-Smith and independent MP Jody Wilson-Raybould.

The pledge to dramatically increase infrastructure spending was a key plank of the Liberal Party’s 2015 election platform. However, several reports by the Parliamentary Budget Office have found the spending has fallen behind schedule.

A 2017 Senate review of the program warned it lacked direction and was overly complicated, with money spread across 31 organizations.

The motion calls on Auditor-General Sylvain Ricard to conclude the audit and issue a report within one year. That timeline would likely be a challenge for his office, which has already laid out its work plan for the coming year and generally takes more than a year to handle larger audit files.

“The Office of the Auditor-General of Canada pays particular attention to requests for audits from parliamentarians. However, the ultimate decision about what to audit rests with the Auditor-General,” Mr. Frigon told The Globe and Mail Wednesday. “Final decisions about what to audit are made in light of the OAG’s mandate, the significance of the issue, the existing audit schedule, and available resources.”

Liberal MPs acknowledge the infrastructure program has faced challenges in getting new projects built, but are laying the blame on cost-cutting provincial governments.

“How is the Auditor-General going to uncork the challenges we are having in provincial capitals where Conservative premiers are refusing to participate with the infrastructure program?" he asked MPs this week, suggesting a review of other governments would be beyond the Auditor-General’s mandate. "How do we get the Auditor-General to investigate the behaviour of provincial premiers who seem pretty stubborn and pretty determined not to build a good country?”

Large infrastructure projects are generally funded equally between federal, provincial and municipal governments, although the precise percentages of funding for specific projects have fluctuated over the years.

A March, 2019, report by Parliamentary Budget Officer Yves Giroux found that provinces appeared to have shaved billions from their own budgets for infrastructure spending as they received larger federal transfers. As a result, the increased federal spending may be helping provinces manage their bottom lines, but was not producing the expected level of increases to overall infrastructure construction in Canada.

The Liberal Party’s 2019 platform signalled the party is prepared to go around provincial governments that do not identify projects for funding.

That pledge is repeated in Prime Minister Justin Trudeau’s mandate letter to Infrastructure Minister Catherine McKenna. It states the federal government will require all provincial governments to identify their specific approved projects by the end of 2021 in order to qualify for federal transfers. If the deadline is not met, the federal money will be transferred directly to municipalities through a top-up of the federal gas tax fund. 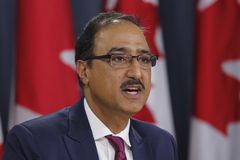