The Canadian subsidiary of Huawei Technologies is trying to put some distance between itself and China’s government as it seeks to burnish its public image in this country.

Alykhan Velshi, vice-president of corporate affairs at Huawei Technologies Canada, told journalists on Monday the Canadian company is worried about two Canadian citizens who have been detained by Beijing since December.

“We’re concerned, like all Canadians, about their well-being,” Mr. Velshi said of former diplomat Michael Kovrig and entrepreneur Michael Spavor.

“This is a time of real tension between Canada and China. And it can only be solved by governments.”

Huawei Technologies Canada, a wholly owned subsidiary of the flagship Chinese firm based in Shenzhen, called a news conference at Ottawa’s National Arts Centre in Ottawa on Monday to highlight its role in bringing high-speed wireless service to remote areas of Canada, an effort to boost its public standing as it makes major requests of the Canadian government.

The company wants the Trudeau government to release Ms. Meng and to ignore U.S. entreaties to impose a national-security ban that could keep its gear out of Canada’s next-generation 5G wireless networks.

Huawei said that, through its work with Canadian telecommunications companies Ice Wireless and Iristel, it will help connect more than 70 rural and remote communities to high-speed internet by 2025. This includes 20 in the Arctic and 50 in Northeastern Quebec.

Separately on Monday, the U.K. government announced it is postponing a decision on whether to bar Huawei from its 5G networks until it has a clearer picture of the impact of U.S. measures against the Chinese company.

Huawei, the world’s biggest telecom equipment maker, is at the centre of a geopolitical tug-of-war. The United States has threatened to cut off intelligence sharing with allies that use Huawei equipment, which it says China could exploit for spying. The Trump administration put Huawei on a blacklist in May, citing national security concerns, barring U.S. chip makers and software companies from supplying it.

Huawei is trying to combat the perception it’s a tool of Beijing.

“If you go to our office in Kanata or … in Markham, this perception that it’s sort of Dr. Evil’s lair and we’re toiling away at the latest world-ending scheme is false. It’s a bunch of engineers solving engineering problems,” Mr. Velshi said.

Huawei’s efforts in the north will help the Trudeau government fulfill a 2019 budget promise of high-speed internet for all of Canada by 2030. In March, the Liberals pledged funds for bringing faster internet to 95 per cent of Canadian homes and businesses by 2026, and 100 per cent by 2030 “no matter where they are.”

Mr. Velshi had little to say on North Korea, noting that Huawei has denied having a presence there. “I think the bigger issue is one of trust. At the end of the day, Huawei has been in Canada since 2008. We’ve worked productively with Conservative governments … with Liberal governments. We have a close relationship at the operational level with Canada’s security agencies, and at no point has Huawei Canada ever received a complaint from one of [the] security agencies or about the equipment.”

The Globe and Mail has reported that Huawei has launched a major lobbying and public-relations campaign to boost its standing with Canadians and federal decision-makers as it tries to avoid being banned from supplying equipment to next-generation wireless networks and win the release of Ms. Meng.

Relations between Ottawa and Beijing have worsened since Ms. Meng’s arrest.

Huawei has hired public-relations and government-relations experts, including Hill+Knowlton Strategies Canada. Some have worked for former Liberal or Conservative governments and some for a wide array of businesses.

Some polls in Canada suggest public opinion is turning against Huawei. Nearly seven in 10, or 68 per cent, of Canadians surveyed by Vancouver-based Research Co. earlier this month said Ottawa should not allow Huawei to participate in 5G networks. That’s an increase of 11 percentage points since February. The online survey of 1,000 adults also found 72 per cent of respondents agree with how Ottawa has handled the Meng case – up nine percentage points since February.

Over the past six months, China has restricted imports of Canadian canola, pork and beef. It also recently confiscated Mr. Kovrig’s reading glasses. While Mr. Kovrig and Mr. Spavor remain in detention, Ms. Meng is free on bail in Vancouver as she awaits an extradition hearing.

With report from Reuters

Opinion
No, Mr. Scheer, the blame for detained Canadians lies in Beijing, not Ottawa Subscriber content 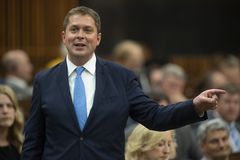 U.S. government to consider Huawei as blacklisted despite President Trump’s call for sales ban to be eased 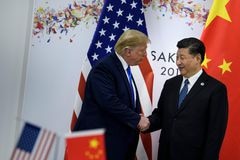