Mr. Doddridge, now 97 years old, is one of close to 2,000 Canadians who were shipped halfway around the world to defend Hong Kong in what remains a relatively overlooked chapter in this country’s Second World War record.

As 2019 comes to a close, however, there are few left alive to tell their story. Only seven Canadian veterans of Hong Kong remain alive, according to the Hong Kong Veterans Commemorative Association. That’s a significant decline from 2017, when 16 were still alive.

The conflict between pro-democracy protesters and government in Hong Kong this past year has illuminated Canada’s ties to the semi-autonomous former British colony, where 300,000 residents hold Canadian citizenship.

But the war service of soldiers such as Mr. Doddridge is a reminder of an even older Canadian link to the former British colony, one that is often overshadowed by Canada’s more expansive military record in Europe.

“I think we’re largely forgotten, if not ignored,” Mr. Doddridge said of Canada’s Hong Kong vets. He returned from the war to build a career as a high-school principal and still lives in New Richmond, Que., on the Gaspé Peninsula, where he grew up.

Many of his fellow soldiers never came back. Of the 1,975 Canadians sent to Hong Kong in the fall of 1941, 290 were killed or died of wounds in Japan’s invasion of the colony, which began the same day in December that Japanese warplanes attacked Pearl Harbor.

The Christmas Day battle – weeks later – was the end of fighting for Mr. Doddridge and D Company of the Royal Rifles of Canada. That same day, Sir Mark Young, the British governor of Hong Kong, surrendered to the Japanese forces, marking an end to a battle that lasted more than 17 days.

Mr. Doddridge recalls how on Dec. 26, 1941, he and other soldiers stacked their rifles, what he called the “last act before total surrender and the equivalent of presenting the sword to the victor.” He said he struggled with mixed feelings as he handed over his Enfield: “My life was spared. The battle was over. But I was a defeated soldier."

The Battle of Hong Kong marked the first land combat by Canadian units in the Second World War, according to the Department of National Defence. Also, Company Sergeant-Major John Robert Osborn, who fought in Hong Kong with the Winnipeg Grenadiers, was the first Canadian recipient of the Victoria Cross – the highest decoration for valour – during the Second World War after he jumped on a grenade to save his fellow soldiers.

Surrender wasn’t the end of the struggle for surviving Canadians, including Mr. Doddridge, who would spend another three years and eight months as prisoners of the Japanese, performing forced labour in inhumane conditions on starvation rations. They endured abuse and severe malnutrition.

Another 264 Canadians lost their lives in Japanese work camps. And two died shortly after they were liberated from the camps.

Some, like Mr. Doddridge, were held in Hong Kong, but many of the captured Canadians were shipped to Japan to work in factories, mines and shipyards.

“They were consigned to hell,” said military historian Nathan M. Greenfield, author of The Damned, a book about the Canadians who fought in Hong Kong. "These men were slaves. They are Canadians who went through the horrors of being a slave, of being beaten, of being starved in Japanese prison camps. "

Mr. Doddridge recalls prison meals were a “dollop of rice in the morning and another bit of rice at night along with some boiled green vegetables." Occasionally the prisoners received fish, but it was often putrid. “You were always hungry and what you did get to eat was not nourishing.”

He said he managed to avoid beatings from the guards by staying off their radar even as the Canadians were forced to work on lengthening airplane runways and digging tunnels. “I was very careful about how I behaved: Never make eye contact, never do things that would attract attention.”

He saw lots of his friends die from malnutrition or sickness in the camps, where many were plagued by vitamin deficiencies that led to diseases such as beriberi, pellagra or blindness. “A lot of the guys died from diphtheria too because the Japanese refused to bring in the antitoxin,” Mr. Doddridge said, referring to a serum used to treat the bacterial infection.

Mr. Greenfield said the health toll of the Japanese prisoner-of-war camps led to early deaths for many Canadian vets after they returned home.

Today, Mr. Doddridge said he wants more Canadians to learn of what happened in Hong Kong. He said that back in 1941, he had no idea what he was in for when he was shipped 12,000 km from home. “I was 19 years old. What do you know about the world anyway? ... We had no idea, at least I didn’t.”

The friends and comrades he left behind, however, are still young men in his memories.

“I forget some of the names but I remember the faces. It was a lifetime ago."

The names of all the Canadians who served in Hong Kong are listed on the Hong Kong Memorial Wall, a commemorative monument in Ottawa near the Department of Global Affairs. 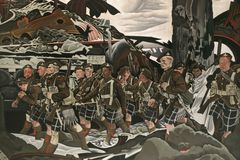