An important eve-of-the-general-election-by-election has delivered the Greens a powerful victory, while shaking both Liberals and New Democrats to the core.

And the result offers further proof that Canada continues to resist the tide of intolerance sweeping the rest of the democratic world.

Paul Manly will join Elizabeth May as Canada’s second Green Member of Parliament, marking the latest in a string of breakthroughs for the environmentally focused party.

Nanaimo-Ladysmith is an interesting harbinger of what might be coming in the general election, less than six months away. Sheila Malcolmson, who held the riding for the NDP before stepping down to make a successful run in provincial politics, won in 2015 with only 33 per cent of the vote; the Liberals and Conservatives tied at about 23 per cent each, and the Greens were fourth at 20 per cent. For a fringe party, that wasn’t a bad result.

But on Monday night, the fringe emerged front and centre. Mr. Manly’s 37.3 per cent of the vote almost doubled the Green results from 2015, partly at the expense of the NDP, which dropped to around 23 per cent. For NDP Leader Jagmeet Singh, the loss of Nanaimo-Ladysmith to the Greens is just the latest bad news, possibly foreshadowing a wipeout on Oct. 21.

It was also a grim night for Prime Minister Justin Trudeau. While the Conservatives slightly improved their vote, to 25 per cent, the Liberal vote collapsed, falling by more than half to 11 per cent – a fourth-place finish for the governing party.

The Grits could be in serious trouble in British Columbia, where they currently hold 17 seats. And what if B.C. is a mirror for Ontario?

Nonetheless, the progressive movement as a whole had a great night. About seven-in-10 votes cast went to either the Greens, the NDP or the Liberals. Remember, back in the nineties, Nanaimo was as likely to elect Reformers as Dippers (though the boundaries were different).

In contrast, Maxime Bernier’s People’s Party, the closest thing Canada has to an above-ground populist, anti-immigrant party won a scant 3 per cent of the vote in Nanaimo-Ladysmith. Mr. Bernier and his bundle of grievances appear to be going nowhere.

Progressives are not doing this well outside Canada. In Europe, where voting for the European Parliament gets under way May 23, polls suggest a gaggle of anti-migrant, Eurosceptic and even anti-democratic parties might win enough seats to dominate, or at least influence, the Parliament.

In the United States, Liberty University President Jerry Falwell Jr. is arguing that Donald Trump should be granted an extra two years in this term, because the investigation by special counsel Robert Mueller distracted from his agenda. The President happily concurs. The Democrats “have stolen two years of my (our) presidency,” he tweeted Sunday.

Europe, the United States, Brazil, the Philippines – the march of illiberal populism is relentless. Freedom House declared 2018 to be the 13th year in a row in which the world become less free. “The pattern is consistent and ominous,” its 2019 report concluded. “Democracy is in retreat.”

But not in Canada. Following Prince Edward Island’s recent provincial election, the Greens are expected to form the official Opposition to a Progressive Conservative minority government. The Greens are also propping up John Horgan’s NDP government in British Columbia. And are now seeing a doubling of representation in Parliament. A party dedicated to environmental causes and other progressive priorities is beginning to move from the sidelines to the centre.

Andrew Scheer’s federal Conservatives are entirely mainstream, though the federal Liberals are trying to demonize the Tories as intolerant and anti-immigrant.

"There is no home in the Conservative Party of Canada for anti-immigrant or racist sentiment,” immigration critic Michelle Rempel stated recently. “Anyone who harbours those beliefs does not have a political home in our movement.”

Ontario Premier Doug Ford is the most populist politician in the country, but he owes a large part of his majority-government victory to support from millions of immigrant voters in suburban ridings within, and just outside of, Toronto.

There are things to worry about. Quebec’s CAQ government’s has brought Bill 21, which would ban the public display of religious symbols for public servants in positions of authority, forward for public hearings. The provincial government is also cutting back on immigration.

But in the main, Canada continues to resist the temptation to look inward, to close the door, to demonize the Other. Nanaimo-Ladysmith proved as much Monday night. 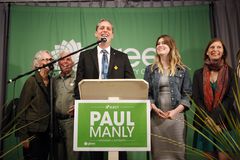