Ian Bailey and Leila El Shennawy
Published May 12, 2021 Updated May 12, 2021
For Subscribers
Comments
Text Size
Please log in to listen to this story. Also available in French and Mandarin. Log In Create Free Account

Canada’s Immigration Minister says he’s not ruling out expanding a new program that would grant permanent residency to 90,000 temporary foreign workers and international student graduates as part of the country’s annual immigration goal.

“I am open to discussing whether or not to revisit the current caps,” Marco Mendicino said in an interview Wednesday.

He made his comment after delivering a speech on modernizing immigration earlier in the day. He said in the speech to the Canadian Club that more than 50,000 people have expressed interest in the spaces since last Thursday’s opening for applications.

He said the Immigration, Refugees and Citizenship department needs to carefully assess the early results of the program, including the quality of applications, and see how quickly the department hits the 90,000 target.

“At that point, I will certainly have a much greater line of sight on whether or not there may be a need to revisit the caps.”

Asked if he could secure cabinet approval for such a shift, Mr. Mendicino said, “Well, we got this far, didn’t we? I am open to revisiting the caps.”

In mid-April, the minister announced the plan to allow 20,000 temporary foreign workers in health care, 30,000 workers in other occupations deemed essential and 40,000 international students who have graduated from a university or college to apply to become permanent residents.

However, migrant groups have criticized the program, saying program exclusions and requirements shut out many refugees, undocumented people and thousands of migrants, with caps in application streams meaning few will be able to get their applications in before spots are filled.

In a statement, NDP immigration critic Jenny Kwan said Wednesday that the rollout of the new pathways to permanent residency for the 90,000 applicants has been problematic, adding it excludes many essential workers and does not recognize those who have lost status.

Also Wednesday, Mr. Mendicino called for moving toward a paperless immigration system that would offer prospective new Canadians more opportunities to file claims online and even be sworn in virtually.

“The reality is that our immigration system is one that has been bogged down by paper. We need to change that,” Mr. Mendicino said in the speech to the Canadian Club. “The technology is behind the times.”

As Canada has raised levels of immigration – the goal is 401,000 new permanent residents this year – Mr. Mendicino said there have been challenges in capacity and processing times exacerbated by the pandemic.

“We need to retire our systems that are long past their best-before date,” he said.

In the interview, Mr. Mendicino said there is an online component to immigration now. “But what I would like to do is transform the entirety of our system,” he said.

“We still have many aspects of the system that have to be done in person or through paper-based applications. Transforming the system means that every aspect of that process will be an online application process with in-person meetings being substituted and replaced by digital and virtual meetings.”

He said he expects there will be a dedicated department team to look at the issue and drive it forward. “I think it’s a safe thing to say this will be a multiyear project, but not that long,” he said.

Ms. Kwan said that while digitizing the immigration application process is “long overdue,” the Liberals have been using this as an excuse to avoid talking about current delays.

“The process to move to a new system could take years and the government has failed to present a plan or provide resources to address current backlogs in a reasonable timeline,” she said.

But Mr. Mendicino said the department is well-advanced on its goals of meeting its target of 401,000 new permanent residents this year.

Jasraj Singh Hallan, the Conservative immigration critic, echoed Ms. Kwan’s concerns, saying the Tories have long called for the modernization of the immigration system. But he said Mr. Mendicino’s announcement does nothing to address thousands of applicants caught in backlogs.

“Because of the Liberal government’s poor management of the immigration system, outdated systems, and paper applications, families who have been trying to reunite with their loved ones have been stuck in massive backlogs and delayed processing times causing hardship,” he said in a statement. 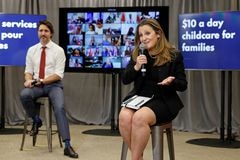