It’s been a running gag ever since she launched her bid to become president of the United States: Amy Klobuchar knows how to handle a Canadian winter.

Not long after the Minnesota senator’s blizzard-bound campaign debut last year, a group of former U.S. and Canadian ambassadors gathered in Washington – a city famous for running and hiding from the white stuff – to discuss, among other things, their preferred nominee.

Gordon Giffin, U.S. ambassador to Canada under Bill Clinton, happened to be hosting his own reception for Klobuchar at his home in Atlanta the very next night. “We’re not expecting snow,” he said, “but I am expecting Amy Klobuchar to be the Democratic nominee.”

Bruce Heyman, who might never have been confirmed in the Senate as Barack Obama’s Ottawa emissary without her help, calls Klobuchar the best hope for both the Democrats and the country.

The solidarity is striking, particularly for a candidate whose visibility challenges have long extended well beyond the weather forecast in Minnesota. But her affinity for the Canada-U.S. file demonstrates why those hoping to reboot relations with the White House could do worse than the first female senator from the North Star State.

She has spent more than a decade as co-chair of the Canada-U.S. Inter-Parliamentary Group, the panel of lawmakers from both sides of the border that works to identify shared interests at the legislative level. She’s also a devout free-trader with a deep understanding of Canada’s priorities, thanks in part to the fact she “can see Canada from her porch,” as she likes to say. Social liberals might take comfort in her support for abortion and LGBTQ rights.

For Giffin, it all comes down to that re-election embassy bash, which featured congressional movers and shakers from both sides of the aisle.

“It was actually a physical manifestation of the way Washington ought to work – these days, Republicans don’t go to Democrat swearing-in parties,” Giffin recalled in an interview Friday.

“Gary and I have a common thread with Amy of seeing how she does politics and government the right way. She works with Democrats and Republicans, and she knows more than something about Canada.”

Heyman credits Klobuchar – “nobody knows the Canada-U.S. file better who’s running for president,” he says – with breaking through a partisan deadlock on Capitol Hill and getting him confirmed by the Senate in 2014. During a subsequent gathering in Ottawa, he saw her bilateral bona-fides up close.

“I’ve seen her work across the aisle at a time when we are a country divided, and parties divided.”

But as the primary fight moves through Nevada and into South Carolina, with Vermont Sen. Bernie Sanders showing signs of pulling away from the pack and Super Tuesday looming on March 3, Klobuchar is facing an uphill struggle for traction with more diverse black and Latino voters in the South. Money is becoming a challenge, too, as donors aim their largesse at the front-runners.

For Giffin, a veteran of the U.S. political trenches, Klobuchar needs to catch a lucky break.

“The voters in South Carolina, no matter what their background or diversity might be, want to be for somebody who’s got a chance to win the nomination first, and secondly to win the general election,” he said.

“I’m not by any means predicting that Amy’s going to be the next president of the United States. I’d be thrilled if she was, and I think the country would be well-served if she was. I think she’s impressing people as she goes along. Can lightning strike? I don’t know.”

North of the border, she’s still a stranger, a new online survey from the Angus Reid Institute suggests.

Sanders was the choice of 28 per cent of respondents to both defeat Trump and herald an improvement in Canada-U.S. relations, besting second-place Joe Biden at 14 per cent. Klobuchar registered just four per cent, with fewer than a third of those surveyed even having an opinion of her.

And that lucky break might have already happened: Klobuchar’s campaign found new life in New Hampshire, where she used the televised debate to promote her reputation as a moderate consensus-builder with a fighting chance against Donald Trump in critical states like Wisconsin and Pennsylvania.

The ensuing momentum, paired with a continuing flurry of newspaper endorsements, painted a target on her back in the next contest in Nevada. That’s where fellow candidate Pete Buttigieg savaged her for supporting a bill to make English the national language and for blanking on the name of the president of Mexico.

“Are you trying to say that I’m dumb? Are you mocking me here, Pete?” Klobuchar retorted, shaken. “He’s basically saying that I don’t have the experience to be president of the United States.”

Friday’s headline in the New York Times said it all: “Klobuchar suddenly rises to rival worth attacking.” 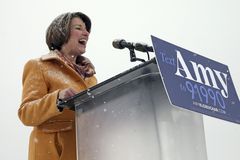 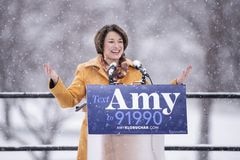