It was a policy change most didn’t see coming. In their first budget, Doug Ford’s Ontario Progressive Conservatives signalled they intend to become the first provincial government to “legalize” internet gambling.

Before that, however, there was a behind-the-scenes lobbying effort by major internet-gambling interests who hired lobbyists with PC ties, notably consultants working for two new firms set up after the Tories took power by Mr. Ford’s campaign vice-chair and transition-team chief, Chris Froggatt, and Mr. Ford’s election-campaign manager, Kory Teneycke.

Mr. Frogatt and Mr. Teneycke were two parts of a troika that ran the winning Ontario PC campaign, along with Dean French, who is now Mr. Ford’s powerful chief of staff. Since the election, their two new firms have enjoyed a lobbying bonanza, signing up a long list of clients who want policy or regulation changes from Queen’s Park. And consultants who worked for the two firms tallied a quick win on internet gambling.

The change is something that internet-gambling companies have sought for years. While some provincial lottery corporations offer internet-gambling sites, including the Ontario Lottery and Gaming Corp., private companies are barred. Yet there is a host of offshore sites that offer internet gambling to Canadians. The gambling companies argue that provinces should license them, bring them into a regulated, legal market and earn revenue from taxing the business.

Until this year, provincial governments had remained wary. It wasn’t really at the top of the gambling industry’s agenda, either: That was pushing to legalize sports betting. It was a surprise when Finance Minister Vic Fedeli pledged in his April 11 budget to create a “competitive market for online [gambling].”

It was a decision that came after a lobbying campaign by internet-gambling concerns through consultants with Tory connections.

Mr. Froggatt’s partner in Loyalist Public Affairs, Dan Mader, along with another Loyalist consultant, Jill Wilson, were hired to represent a major internet-gambling player, Stars Group Inc. – a publicly traded company with headquarters in Toronto but operations in the Isle of Man. (Stars Group reported a profit of $1.57-billion in 2018.) In fact, last fall Stars Group dropped its Ontario lobbyist who had Liberal ties, Charles Bird of Earnscliffe, and hired Loyalist instead.

Patrick Harris, a lobbyist with Mr. Teneycke’s firm, Rubicon Strategy Inc., was registered to represent something called the Canadian Online Gaming Alliance (COGA). The alliance is a makeshift trade association that served as a lobbying umbrella for three offshore internet-gambling giants that operate from the Isle of Man and Britain: Bet365, which handled £52.5-billion ($92-billion) in bets in the 2017-18 fiscal year; GVS, which operates sites such as PartyCasino and Ladbrokes; and Microgaming Systems, which licenses gambling software to sites.

Both firms lobbied the Premier’s office, as well as the offices of Mr. Fedeli and Attorney-General Caroline Mulroney. Mr. Froggatt said in an e-mail that consultants at his firm also lobbied the office of Treasury Board President Peter Bethlenfalvy.

Representatives of both firms insist they didn’t make the policy change happen – but instead worked with a government inclined to such a move.

A spokesman for Mr. Fedeli, Robert Gibson, didn’t say what led to the decision, or who lobbied whom.

“The government meets with experts and stakeholders regularly to help inform good public policy,” he said in an e-mail.

The legalities are complicated. In Canada, gambling is criminal, except when provincial governments “conduct and manage” the activity. Canadian law doesn’t prohibit provinces from licensing private online-gambling companies, said Danielle Bush, a partner with Miller Thomson in Toronto and the corporate secretary of the Canadian Gaming Association. But it is not 100-per-cent clear: Federal law does not explicitly say provinces can do it, either.

Ms. Bush said she hadn’t expected this change to come this fast. But she credited Mr. Ford with being practical. Online gambling exists, and now Ontario can regulate and tax it, she said. Several European countries already do.

“The policy issue has a great deal of merit,” Mr. Froggatt said in an e-mail.

For years, another lobbyist, Troy Ross of TRM Public Affairs, has tried to convince government of that case. Mr. Ross, who spent five years working for the Alcohol and Gaming Commission of Ontario, noted that in 2012, the Ontario Tories, under then-leader Tim Hudak, considered the idea of legalizing online gambling.

Mr. Harris, a former PC staffer when John Tory was leader, had also worked at TRM; when Mr. Harris left to join Rubicon last year, Mr. Ross put him on a retainer.

Although both men are registered to lobby for the COGA, the Alliance had actually been set up as a sole proprietorship by Mr. Ross to lobby for the three foreign internet-gambling companies.

Neither Mr. Ross nor Mr. Harris had indicated on their lobbying registrations that those firms were behind the COGA, and their lobbying, as required by law. Mr. Ross did identify them when The Globe and Mail asked last week.

In response to a follow-up e-mail sent Tuesday, Mr. Ross said he had contacted Ontario’s Office of the Integrity Commissioner to correct his registration. 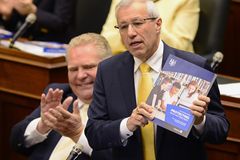