Prime Minister Justin Trudeau condemned hatred toward the Muslim community at Thursday’s national summit on Islamophobia, but community leaders say they need to see the government follow up with concrete actions after the discussions if the event is to effect real change.

Thursday’s virtual summit brought together government ministers and members of the Muslim community to discuss how to combat the recent rise of Islamophobia in Canada. It comes a few weeks after a man is alleged to have deliberately driven into a Muslim family in London, Ont., killing four people and leaving a child injured, and after other recent attacks on Muslims in Hamilton and near Edmonton.

The event took place a day after an antisemitism summit, both of which are part of the government’s Anti-Racism Strategy.

Though the summit has been applauded as a step toward tackling Islamophobia, Muslim community leaders say that conversations are not enough, and that the government should set out clear actions to combat hate-motivated attacks within Canada.

Ahead of Thursday’s summit, the advocacy organization the National Council of Canadian Muslims (NCCM) released 61 recommendations that it said came out of consultations with the community. The recommendations target every level of government and include a call to create a federal anti-Islamophobia strategy by the end of the year.

“We are cautiously optimistic that more change will follow – and as we engage with various levels of the government across Canada, we will not stop until change comes,” said Mustafa Farooq, chief executive officer of the NCCM, in an e-mail statement.

Mr. Farooq added that the organization will be issuing a document within two months outlining what actions different levels of government have committed to. He said the NCCM has to see those next steps before it can say if the summit was a success or not, but he did say there were some positive signs, such as commitments to provide resources to combat Islamophobia.

Senator Salma Ataullahjan, who sits with the Conservative Party of Canada, also said she’ll be watching what the federal government does following the summit. She said that it’s common for Muslims in Canada to hear hateful remarks, and that women wearing hijabs can be particularly targeted.

As the summit got under way Thursday afternoon, Ms. Ataullahjan said she watched how the comment section of the Facebook livestream began filling with all-too-familiar hate. She took screenshots of some of the remarks to share on Twitter, writing that she was “horrified – but not surprised” by the comments.

“This is the rhetoric we’ve been hearing for some time,” she said in an interview with The Globe and Mail. She said the government needs to take actions to help Muslim Canadians feel safer, and that she wants to see a national strategy to fight Islamophobia come out of the summit.

“We as political leaders, we get up and we condemn, and we forget,” she said. “Words are not relevant any more. Do something.”

Mr. Trudeau was joined at the event by two ministers: Bardish Chagger, Minister of Diversity, Inclusion and Youth, as well as Omar Alghabra, Minister of Transport.

Speaking at the summit, Mr. Trudeau said his government will continue to support Muslim Canadians, and it has already taken action to “stamp out hate wherever it rears its ugly head.”

He said this includes fighting misinformation with education, investing to help protect mosques and community centres, and cracking down on online extremism and far-right hate groups.

“Right now, we do have to fight for the kind of Canada we all want to see … where we look out for each other,” he said. “That’s the promise our country must work hard to live up to. Because too many times and for too many people, that promise has been broken.”

He added that he wanted to listen to those who’ve had to deal with Islamophobia, and that their experiences should be central to how the government approaches its work.

“This is not your burden to carry alone,” he said. “As a society, this is everyone’s responsibility to take on.” 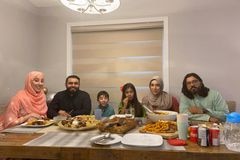 As government hosts antisemitism summit, opposition leaders say they should have been invited to speak
July 21, 2021 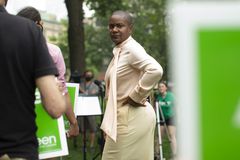 Opinion
If governments want to combat Islamophobia, they will need to take a hard look in the mirror
July 20, 2021 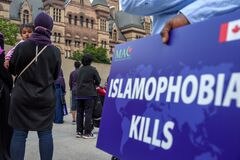 Follow Menaka Raman-Wilms on Twitter @menakarw
Report an error Editorial code of conduct
Due to technical reasons, we have temporarily removed commenting from our articles. We hope to have this fixed soon. Thank you for your patience. If you are looking to give feedback on our new site, please send it along to feedback@globeandmail.com. If you want to write a letter to the editor, please forward to letters@globeandmail.com.
Comments are closed