The TikTok begins with NDP Leader Jagmeet Singh rolling up his sleeves, and then he starts to dance. The video is in the style of an emerging trend on the social-media platform, featuring a popular song and overlaid with text.

“When they say young people don’t vote,” the words above Mr. Singh read, “but you know they’re going to make history in the next election.”

This is one of Mr. Singh’s latest posts on TikTok, where users share short videos that are typically less than one minute long, and it’s been viewed more than four million times. The NDP leader has more than 690,000 followers on the platform.

While all the major federal party leaders have Twitter and Facebook accounts, it’s Mr. Singh’s presence on TikTok and Snapchat, which skew to younger demographics, that sets him apart. The NDP are working to reach young Canadians on platforms they use; however, the real test will be translating Mr. Singh’s social-media celebrity into votes in an upcoming election.

“How do we make sure that they show up to vote, when it’s a crowd of people who typically are not known to show up to the polls?” said Mélanie Richer, a spokesperson for the NDP. “It’s tapping into digital strategy.”

Ms. Richer said the NDP are gearing up for an election, and that Mr. Singh will continue to travel the country this summer. But in addition to the cross-Canada tour, the party has been working to engage young voters in the digital space.

If Justin Trudeau doesn’t win a majority in the next election, Jagmeet Singh may be the reason

The NDP has a two-part strategy for engaging youth, according to Ms. Richer. “One, it’s talking to young people about what Jagmeet’s about,” she said. “But two, also convincing them to go vote.”

Young people are a key demographic for the party, and since they don’t typically show up to the polls in droves, part of the NDP’s campaign will be focused on basic electoral education. They want to provide information on how to vote, Ms. Richer said, and make the process accessible.

“TikTok is a tool that we’ll keep using,” she said, because it lets them reach young people where they’re spending time. “If we can get that group out to vote, I think that’s where we see things move for us in quite a few ridings.”

Using positivity on social media is key to the youth vote, said Grace Nosek, a PhD candidate at the University of British Columbia who studies youth political engagement and climate justice. If young people are told they’re not expected to vote or they can’t effect change, she said, they’re less motivated to do so.

“Instead, you want to use this really positive social pressure, like actually tons of young people are voting, it could be the most massive time ever,” she said. “You’re expected to vote, your friends are voting.”

Mr. Singh’s latest TikTok video, she said, could motivate young people in this way because it appears genuine. “He’s so good at just being authentic on those platforms,” Ms. Nosek said. “Youth can smell desperation in these spaces, and they know when they’re kind of being manipulated or targeted.”

Ms. Nosek also emphasized the importance of voter education, noting that barriers to voting are higher for youth: Simple things like not knowing if you can vote in the riding you’re living in for university, she said, can lead to them sitting out the process.

Only about 54 per cent of people aged 18-24 voted in the 2019 federal election, compared to the overall voter turnout of 67 per cent, according to Elections Canada.

The organization’s 2015 National Youth Survey showed that nearly a quarter of 18- to 22-year-olds who were eligible to vote for the first time said they were not interested in Canadian politics, and 46 per cent said they didn’t think government cared much about what they thought. A full 50 per cent said that politics is sometimes too complicated to understand, a number that rose to nearly 60 per cent for Indigenous youth and those in ethnic minorities.

The NDP’s strategy of connecting with youth could help to close these gaps, but that may only be the first step in getting people out to the polls.

Ms. Heerspink said that social media should be a starting point to bring young people into politics and policy development.

“Often young people are kept out of these conversations, and I think that that’s what spurs a lot of the apathy,” she said, adding that having politicians talk to youth and address their concerns lets them feel like their vote matters.

Though she said it’s great to see Mr. Singh engage with young people on platforms like TikTok, she wants youth to have more opportunities to share their opinions and thoughts with politicians.

She said social media has to be “a place for young people to actually be able to connect with politicians to have their voices heard.”

A spokesperson for the Conservative Party, Cory Hann, said that over the past year and a half, “our team and supporters have had more experience campaigning virtually than any other political party in Canada.” He said they’ll use social media “technologies and techniques that worked well” in their election campaign.

Aidan Strickland, press secretary for the Ministry of Diversity, Inclusion and Youth, said the government is “committed to engaging, encouraging and empowering the voices of our young people to be active members of our society.” He also mentioned the Prime Minister’s Youth Council, which “actively participates and informs the very policies that our government makes.” 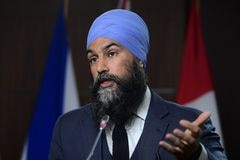 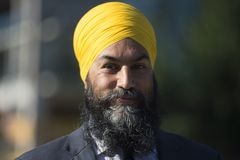 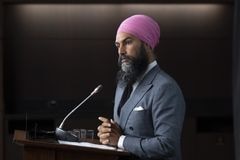