Kevin O’Leary is using a taxpayer-funded program for Olympic athletes to attract donors to an event to pay down the $530,000 debt remaining from his failed federal Conservative leadership bid.

As part of his sales pitch for the April 5 event in Toronto, Mr. O’Leary, a well-known businessman and television personality, is promising to match the $2,000 ticket price with an equivalent donation to the Canadian Olympic Foundation. Mr. O’Leary says the federal government will also match the $2,000 contribution through its NextGen program to fund future Olympic and Paralympic athletes.

There are 250 tickets available for the event, which means Mr. O’Leary will donate $500,000 if it sells out, with another $500,000 from the government’s matching fund. Mr. O’Leary, who dropped out of the Conservative leadership race before the vote, said he doesn’t consider the event to be a political fundraiser, because none of the money goes to the Conservative Party of Canada.

“Most people look at it and say that contest is over, O’Leary’s not involved in politics anymore, but he has to play by the rules to pay this back, and he can’t use his own money. But I can contribute to a charity and match it,” he told The Globe and Mail.

The foundation is a registered charity that provides tax receipts to donors. It is chaired by one of Mr. O’Leary’s chief campaign fundraisers, Toronto lawyer Perry Dellelce, who did not respond to a request for comment.

In a statement, the foundation thanked Mr. O’Leary for its help in raising funds.

“The Canadian Olympic Foundation is pleased that Kevin O’Leary is personally contributing up to $500,000, which will be matched … towards the Next Generation fund. We are always delighted when individual Canadians step forward to help ensure future Olympic success by supporting our Foundation,” CEO Paul McIntyre Royston said in a statement.

The Liberal government, which has come under fire from the Conservatives over its past fundraising practices, criticized the planned event. The Liberal Party now advertises all of its fundraisers featuring Prime Minister Justin Trudeau and his cabinet following an outcry over private cash-for-access events.

“We are proud to see anyone support our athletes, however, Mr. O’Leary should do it separately from financing his leadership bid,” said Kirsty Duncan, Minister of Sport and Persons with Disabilities.

Mr. O’Leary said the government matches donations every day, and his should be no different.

Mr. O’Leary dropped out of last year’s leadership contest and endorsed Maxime Bernier, who went on to lose the leadership by a razor-thin margin to Andrew Scheer.

According to Elections Canada records, unpaid claims from Mr. O’Leary’s campaign total $529,184, with nearly $200,000 coming from the candidate himself.

Mr. O’Leary has previously said whatever he raises will go toward paying back vendors – such as photographers, printing services and marketers – before himself.

The fundraising event at Toronto’s Casa Loma, called Three Sharks in a Castle, will bring together Mr. O’Leary and two of his TV co-stars, real estate mogul Barbara Corcoran and billionaire Mark Cuban, co-owner of the NBA’s Dallas Mavericks.

Mr. O’Leary will grill his friends on everything from “entrepreneurship, net neutrality, blockchain and cyber currencies, diversity and inclusivity, the global real estate market, the Dallas Mavericks basketball team and Mr. Cuban’s potential bid for the presidency of the United States of America,” according to his press release.

The maximum annual donation to a leadership campaign is $1,575, but Elections Canada rules allow for a higher ticket price to help cover the expenses of the event. Mr. O’Leary said he would hold similar fundraisers in the future, since the Casa Loma event would still leave him almost $150,000 short of repaying his debt.

The NextGen matching fund was created in the Conservative government’s last federal budget in 2015 to provide money, “matched by the private sector,” for future Olympians and Paralympians. The program was extended by the Liberals in 2017, with a maximum annual contribution of $5-million.

Attendees will receive a tax credit of $650. 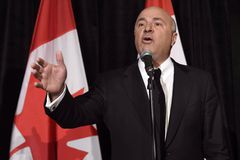