Prime Minister Justin Trudeau pressed U.S. President Joe Biden Friday afternoon for help in securing the release of two Canadians who remain locked up in China in apparent retaliation for Ottawa’s 2018 arrest of a Huawei executive wanted by American authorities.

The phone call between the two leaders, which lasted more than 30 minutes, was their first conversation since Mr. Biden was sworn into office Wednesday. They agreed to hold a meeting next month, according to a statement from the Prime Minister’s Office, but it’s not known yet whether this will be in-person or virtual.

Canadians Michael Kovrig and Michael Spavor have been incarcerated in China for 775 days. They were jailed by Beijing shortly after the RCMP arrested Huawei chief financial officer Meng Wanzhou on an extradition request from the United States. Mr. Trudeau has previously described what Beijing did as “retaliation.”

A Canadian official said that during the Friday call, which included Mr. Biden reminiscing about his last visit to Canada as vice-president in December, 2016, Mr. Trudeau asked the President for assistance in resolving the issue. The Globe and Mail is not identifying the official because they were not authorized to discuss the contents of the call publicly.

The PMO’s readout of the call said: “The two leaders discussed the arbitrary detention of Michael Kovrig and Michael Spavor and agreed to work together.”

The Trudeau-Biden conversation on the two Michaels came as the Wall Street Journal reported Friday that China is pushing for a meeting of its top diplomat with senior aides to Mr. Biden to explore a proposal for a summit with Chinese President Xi Jinping to ease tensions between the two powers.

David MacNaughton, former Canadian ambassador to Washington and trusted adviser to Mr. Trudeau, was asked in a recent interview whether there was a good chance that the Biden administration could work out a deferred prosecution agreement with Ms. Meng to allow her to return home and bring up the release of the two Michaels.

“I best not answer that question,” he said.

Ms. Meng is out on bail in Vancouver and fighting a request from the United States to extradite her to New York to face a multitude of charges including bank fraud and violations of U.S. sanctions against Iran.

As of last month, the U.S. Justice Department was in discussions on a plea agreement with lawyers for Ms. Wanzhou that would allow her to return to China, and which could open the door for the release of Mr. Kovrig and Mr. Spavor.

Mr. Trudeau expressed disappointment that Mr. Biden cancelled the permit for Canadian-owned Keystone XL pipeline shortly after he was sworn in this week, the PMO said in its statement. According to the Canadian official, Mr. Biden acknowledged this had hurt Canada and Canadian workers but reiterated that it was a campaign commitment he had made when running for office.

The two men discussed working together on fighting COVID-19 including the new variants of the coronavirus. Mr. Trudeau mentioned the thousands of Canadian health workers who cross the Canada-U.S. border each day to work in U.S. medical system, including the Detroit area.

They talked about Canada’s concern about the Biden administration’s Buy America policies that threaten to shut Canadian companies that have long sold goods and services to government buyers in the United States. Mr. Trudeau highlighted how interconnected Canada and U.S. supply chains were and the two leaders agreed to remain in close contact as Washington embarks on pandemic-recovery spending on items such as infrastructure.

Mr. Trudeau also raised the long-running softwood-lumber dispute, where the U.S. has been collecting levies on shipments from Canada for four years. He told Mr. Biden that Canada would like to see the duties lifted.

The two men talked about how they can work together in areas such as zero-emission vehicles and clean electricity, the Canadian official said.

Mr. Trudeau and Mr. Biden also “agreed to expand co-operation on continental defence and in the Arctic, including the need to modernize NORAD, and discussed their Foreign Affairs and national Defence ministers and secretaries of state meeting at the earliest opportunity,” the PMO said.

Later, Friday evening, the White House said in a statement that Mr. Biden during the call “acknowledged Prime Minister Trudeau’s disappointment regarding the decision to rescind the permit for the Keystone XL pipeline, and reaffirmed his commitment to maintain an active bilateral dialogue and to further deepen cooperation with Canada.”

In a Jan. 21 letter to the Prime Minister, the Premier said Mr. Biden’s decision sets a very worrisome precedent.

“By retroactively revoking the presidential permit for this project without taking the time to discuss it with their longest-standing ally, the United States is setting a deeply disturbing precedent for any future projects and collaboration between our two nations,” Mr. Kenney wrote in the letter.

He urged Mr. Trudeau “to find a path to the consideration of Keystone XL” as part of a broader discussion about “North American energy and climate agreement.”

He also called on the Canadian government to press the U.S. government to compensate owner TC Energy Corp. and the government of Alberta for “billions of dollars of costs incurred in the construction of Keystone XL to date.”

Earlier on Friday, before the call, Mr. Trudeau had signalled he wants to move beyond the Keystone XL disagreement with the Biden administration because there are so many other areas where he wishes to collaborate with his American counterpart, from fighting climate change to resolving the COVID-19 pandemic.

“I think the fact that we have so much alignment … on values of creating jobs and prosperity for everyone and opportunities for everyone and investing in the fight against climate change as a way of growing the economy, looking to be coordinated and aggressive in stepping up in our measures against COVID-19.” 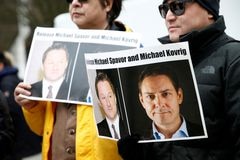 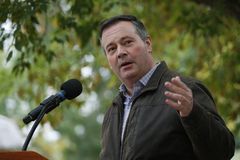 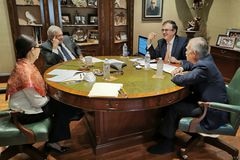