Quebec Premier François Legault says Malala Yousafzai, a Nobel Peace Prize laureate and renowned advocate for girls’ education, would not be allowed to teach in his province unless she removed her head scarf, saying his Education Minister did not make a mistake when he made that assertion.

Jean-François Roberge, Quebec’s Education Minister, faced a barrage of criticism over the weekend that made headlines as far as Britain and the Middle East, after tweeting a picture of himself with Ms. Yousafzai after they met in France, saying that they discussed education and international development.

Mr. Roberge was asked in a Twitter exchange with a journalist named Salim Nadim Valji whether Ms. Yousafzai, who wears an Islamic head scarf, could teach in his province, which has banned religious symbols in the public sector. Mr. Roberge said it would be an honour for Quebec to have Ms. Yousafzai teach, but that in Quebec, "as in France … as well as in other open and tolerant countries, teachers can’t wear religious signs while performing their duties.”

Quebec’s legislature adopted Bill 21 last month, which bans public sector workers – whether they are teachers, judges or police officers – from being able to work if they wear a religious symbol, such as a turban, a head scarf, or a kippa. The Canadian Human Rights Commission said months before the bill became law that it targets people for their religious beliefs and would limit people’s opportunities to participate in society.

Ms. Yousafzai was born in the Swat region of Pakistan, where she became an advocate for girls’ education. She was shot in the head by the Taliban at the age of 15 while she was on the bus home from school. She survived the attack and, in 2014, was awarded the Nobel Peace Prize for her work in supporting young girls’ right to education.

The activist, now 21, runs the Malala Fund, which raises money to help girls around the world access education. Since 2018, she has been studying philosophy, politics and economics at the University of Oxford.

Mr. Roberge’s response prompted outrage on social media. Liberal MP Omar Alghabra tweeted that, “No government should ever tell a woman how to dress.”

Speaking with reporters in Quebec on Monday, Mr. Legault was asked whether Mr. Roberge made a mistake and the Quebec Premier made it clear that he does not believe he did.

“These are two different subjects. Malala did extraordinary work to promote education for young girls. Unfortunately, in some countries, there are still young girls who don’t have access to education," he said in French. "Now, when it comes to teaching in schools, here in Quebec – like in France, Germany and Switzerland – we have made the choice that teachers won’t be able to wear religious symbols.”

A spokeswoman for Maryam Monsef, the federal minister responsible for women and international development, said the Liberal government’s position is that, “It is not up to politicians to tell people what to wear or not to wear.”

“Canada is already a secular state and that is reflected in our institutions,” Justine Villeneuve said. “This new law undermines fundamental rights and individual freedoms because it forces some people to choose between their religion and their job.”

While the federal government has criticized the bill, it hasn’t taken any steps to challenge it.

NDP deputy leader Alexandre Boulerice said that his party took note of Mr. Roberge’s tweet, but added that it is up to the province to decide its laws.

“Of course, like everyone else, we noticed the striking irony of this image. Malala is a role model for all the girls throughout the world. An example of courage and determination for women’s rights.”

“She would be a remarkable teacher and yet now she could not find herself in front of a class in Quebec. Of course, it is up to the National Assembly to decide on these rules, but here is a good example of the inevitable contradictions in the application of this law,” he added.

Daniel Schow, a spokesman for Conservative Leader Andrew Scheer, said that Ms. Yousafzai is a champion for human rights and a model for girls around the world who are fighting for access to education.

“A free society must always protect the fundamental rights of its citizens and must not prevent its citizens from expressing themselves,” said Mr. Schow, adding that if Mr. Scheer were elected prime minister, he would "never introduce such a bill at the federal level.” 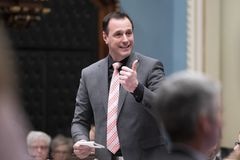