Former Conservative leadership candidate Leslyn Lewis says she will run in the next federal election and is considering ridings in Ontario and Western Canada.

Ms. Lewis is a lawyer from Toronto who was relatively unknown in politics until she ran for the leadership, attracting significant support from party members and placing third in the race. Ms. Lewis said she is discussing with her family where she should run as a candidate.

“I have to say that I’ve never felt so supported and loved by any region than I have by the West,” the 49-year-old Ms. Lewis said in an interview. She said, however, that Ontario is her home, and she will decide next week. Ms. Lewis said her decision will depend on finding a school with the best academic and athletic program for her son, who is 15. She also has a daughter who is 22.

Ms. Lewis ran unsuccessfully as a Conservative candidate in the 2015 federal election, filling in at the last minute after a candidate was dropped from the campaign. She decided not to run in 2019 because she was completing her PhD on Canadian companies and the ways in which they can help developing countries develop natural resources sustainably. Ms. Lewis also holds a master’s degree in environmental studies.

Erin O’Toole won the Conservative leadership contest in the third round of voting after securing the ranked-ballot votes of many supporters of Ms. Lewis. She had the most votes on the second ballot, but because the system is based on allocating 100 points for each of the 338 ridings rather than total votes, she was eliminated.

If Trudeau really wants a fall election, he’ll probably have to call it himself

Over all, former cabinet minister Peter MacKay placed second in the race and MP Derek Sloan was fourth.

As the leadership election night stretched into the early hours of Monday morning, it was clear that Ms. Lewis would “definitely” run in the next federal election, Conservative MP Cathay Wagantall told The Globe and Mail.

Ms. Wagantall said she endorsed Ms. Lewis’s candidacy after meeting her and hearing about her policies. She said she is “extremely proud” of how well Ms. Lewis performed in the race and said if the campaign had been a bit longer, she could have won.

Ms. Lewis campaigned on scrapping the carbon tax and investing in technology that would increase energy efficiency and lower emissions. She proposed tax credits to homeowners and businesses who make their properties environmentally friendly and would restrict the dumping of raw sewage into the country’s waterways.

She vowed to push back against political correctness, proposed anti-abortion policies and said she would cancel Canada’s participation in the UN Global Compact for Migration, saying Ottawa should decide who comes to Canada, not the UN. Ms. Lewis was also opposed to Liberal legislation that bans conversion therapy on LGBTQ people.

Ms. Lewis said she believes she fared particularly well in Western Canada because she can relate to people there. She said she wasn’t given a fair shot by pundits and was ignored by many in the party.

“They saw how I was being treated and they feel that they were treated in a similar way,” she said.

Ms. Wagantall said that while Mr. O’Toole won and she supports him, he did so “with votes from Leslyn and from Derek and I know that he realizes that.”

Mr. O’Toole said at his first media conference as leader that he was elected as a “pro-choice Conservative MP, one that won with a strong mandate,” adding that is how he will lead as Leader of the Opposition and as prime minister. His office said Mr. O’Toole will allow MPs to introduce private members’ bills on “topics that matter to their constituents” and free votes on “matters of conscience.”

Ms. Lewis said it is important that Mr. O’Toole has been honest about where he stands on the issue.

What virus? At GOP’s convention, pandemic is largely ignored
August 27, 2020 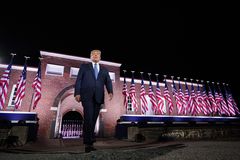 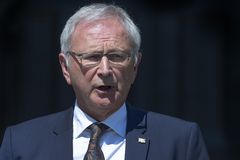