The Liberal government says it will work with Parliament on the Criminal Code to make changes that would “explicitly penalize” people who neglect seniors in their care.

The government’s Throne Speech vows to address gaps in the country’s social systems – particularly those that became evident early in the COVID-19 pandemic, such as the mistreatment of seniors in long-term care homes, and the disproportionate economic effects on low-income women.

The speech said that although long-term care is provincial and territorial jurisdiction, the federal government will take “any action it can” to support seniors.

“The government will work with Parliament on Criminal Code amendments to explicitly penalize those who neglect seniors under their care, putting them in danger,” the speech said.

Earlier this year, the Canadian Armed Forces deployed members to long-term care homes in Ontario and Quebec to help respond to the pandemic. They reported abuse and mistreatment.

In Ontario, they documented insect infestations, skin damage to residents forced to sleep without linens because of shortages, and patients left in soiled diapers. They uncovered poor palliative care, COVID-19 patients in rooms with people who did not have the virus, and abusive staff. In Quebec, they documented surgical masks and narcotics going missing and employees ignoring safety instructions.

The speech said the government will work with the provinces and territories to set national standards for long-term care, take steps to help people stay at home longer and look at measures to help personal support workers.

Nathan Stall, a geriatrics and internal medicine physician at Mount Sinai Hospital, pointed out that elder abuse is already a crime, but said the repercussions for operators of care homes who fail to protect their residents have been inadequate to discourage repeat offenders.

“Amending the Criminal Code to penalize those responsible for neglecting older adults in long-term care, and hopefully other congregate-care settings like retirement homes, seems like a necessary policy change,” he said.

Dr. Stall said he hopes the standards include minimum staffing levels, fair and full-time pay with sick benefits for staff, rules for infection prevention and control and emergency management plans. He said it is important that criminal culpability for violation of federal standards rest with operators, not individual staff.

Ivana Yelich, a spokesperson for Ontario Premier Doug Ford, said the Premier has said bad actors should be held accountable, so further protection for seniors “is welcomed.”

Doris Grinspun, chief executive officer of the Registered Nurses' Association of Ontario, said her organization is “delighted” with the creation of national standards, adding provinces are failing seniors in nursing homes.

The Throne Speech said the pandemic has hit women, particularly those with low incomes, the hardest. It said the government plans to create an action plan to help women get back into the work force and to ensure a “feminist, intersectional response” to the pandemic and recovery. The government said it will make a long-term and sustained investment to create a Canada-wide early learning and child care system.

“The government will build on previous investments, learn from the model that already exists in Quebec, and work with all provinces and territories to ensure that high-quality care is accessible to all.”

Lindsay Tedds, associate professor and scientific director of fiscal and economic policy at the University of Calgary, said the focus on early learning suggests Ottawa is serious about the quality of the plan. “Quality was the part that Quebec did not pay enough attention to in their early rollout,” she said. On the action plan for women, Prof. Tedds said: “We absolutely need to revisit the entire institutional approach to women as secondary to the economy.” 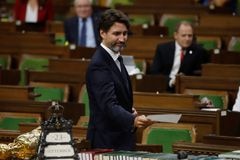