Newly elected Liberal MP George Chahal is under police investigation after he was caught on camera removing campaign literature from his Conservative opponent at a voter’s house, the Calgary Police Service said on Friday.

Mr. Chahal is one of two Liberals elected in Alberta, after the party was shut out of the province in 2019. Many Liberals had expected him to be appointed to cabinet. The Prime Minister’s Office declined to comment on the matter.

On Sept. 19, a home security camera showed Mr. Chahal replacing a flyer for Conservative candidate Jag Sahota, which was taped to the door of resident Glenn Pennett’s house, with one of his own. Mr. Pennett told The Globe and Mail on Friday that Ms. Sahota’s flyer had information on where and when to vote on Monday. The flyer left by Mr. Chahal also had voting information, but Mr. Pennett said it was incorrect.

“He took it off, crumpled it up and left his. And his has absolutely the wrong information,” Mr. Pennett said.

Mr. Chahal was previously a Calgary city councillor. He defeated Ms. Sahota, who was elected MP for Calgary Skyview in 2019.

On Friday, the Calgary Police Service confirmed it had launched an investigation.

“The report has been directed to our anticorruption unit that handles investigations of a sensitive nature or involving a public official,” Calgary Police Service spokesperson Tanja McMorris said in a statement. “We are in the very early stages of the investigation and at this point we have not yet determined if the investigation will remain with CPS or be transitioned to a federal body, such as Elections Canada.”

The Prime Minister’s Office directed The Globe to Mr. Chahal’s campaign for comment. His campaign did not release a statement from the new MP, but his former campaign manager, Randall Zalazar, said Mr. Chahal “removed a piece of campaign literature that identified an incorrect polling location for the person residing at the address.

“All through Election Day, campaign volunteers found incorrectly labelled materials across the eastern side of the riding. Our campaign contacted Elections Canada and advised them of the issue,” Mr. Zalazar said.

Mr. Pennett did not have a picture of Ms. Sahota’s flyer, but said he left it on his door because he supported her, and that it had the correct polling information. Mr. Chahal’s flyer directed area voters to a polling station about 18 kilometres away from the correct one.

Mr. Zalazar said neither Mr. Chahal nor the campaign had been contacted by the Calgary Police Service. “We have not been made aware of any ongoing investigation related to this matter,” he said.

The Commissioner of Canada Elections is responsible for enforcing the Canada Elections Act. Spokesperson Véronique Aupry said confidentiality provisions prevent the office from commenting on whether it has received a complaint or launched an investigation.

However, she said the law prohibits “impairing or preventing the transmission of election advertising,” which would include defacing or removing election signs or advertising.

“Another Liberal under investigation by an anticorruption unit shouldn’t surprise anyone,” Mr. Hann said. “This is exactly what we said would happen - just more of the same corruption and lack of ethics from the Trudeau Liberals.” 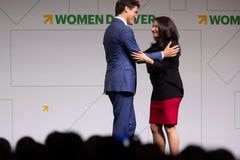