The Liberal Party is calling on two oversight authorities in Saskatchewan to investigate Conservative Leader Andrew Scheer’s claim that he was an insurance agent even though he was never licensed for the job.

The Liberals took aim at Mr. Scheer after The Globe and Mail reported Saturday it could find no evidence of the licence required by law to be an insurance agent.

In official bios (such as the one on his Facebook page), Mr. Scheer is said to have been an insurance broker before entering public life. His office said he was an insurance agent. He was not.

“The Saskatchewan Insurance Act clearly states a broker must be licensed, and that misrepresenting oneself as a licensed broker is a serious offence that could lead to serious penalties,” reads a letter from Ontario Liberal candidate Marco Mendicino to the Financial and Consumer Affairs Authority of Saskatchewan and the Insurance Councils of Saskatchewan

When asked about his qualifications in Edmonton on Saturday, Mr. Scheer said he received accreditation through a broker program.

“As my staff mentioned to your newspaper, I left the insurance office before the licensing process was finalized,” Mr. Scheer said.

Daniel Schow, a spokesperson for the Leader, also told The Globe that Mr. Scheer did clerical work, such as issuing licence plates and collecting payments.

Liberal Leader Justin Trudeau declined to weigh in on the matter at a Sunday press conference in Mississauga. “I will let Andrew Scheer answer those questions,” Mr. Trudeau said.

The letter is addressed to Roger Sobotkiewicz, a superintendent for the insurance and real estate division of the Financial and Consumer Affairs Authority, and Darryl McKay, chair of the Insurance Councils of Saskatchewan.

Attempts to contact both men on Sunday were unsuccessful.

The Conservative campaign had Sunday off but spent Saturday in Edmonton with Alberta Premier Jason Kenney.

Mr. Kenney called the Conservative Leader “a man who is working hard to get our country back on track.”

The federal Conservative Leader has yet to be seen on the campaign with Ontario Premier Doug Ford, however. When asked about not campaigning with Mr. Ford, Mr. Scheer said he is meeting with Canadians and Conservatives across the country who are “tired” of the Liberal government.

At the Edmonton event, Mr. Scheer reannounced his promise to build a national energy corridor.

The Conservatives say its creation would create economic and social benefits by moving energy and resources, including oil, gas and hydroelectricity. However, it’s expected it would face stiff opposition from provinces such as Quebec, where Premier François Legault has said there is no “social acceptability” for a new oil pipeline.

The Conservatives also said they would appoint a panel to give recommendations within six months on how to proceed with the plan.

The latest daily tracking numbers from Nanos Research show the Liberals and Conservatives remain tied for first place, with the Conservatives at 34 and the Liberals at 33 per cent – a divide that falls within the margin of error. The NDP sits at 13, the Green Party at 13, the Bloc Québécois at 5 and the People’s Party of Canada at 2.

The poll was sponsored by The Globe and Mail and CTV, with a total of 1,200 Canadians surveyed from Sept. 26 to 28. It has a margin of error of 2.8 percentage points, 19 times out of 20. Respondents were asked: “If a federal election were held today, could you please rank your top two current local voting preferences?” A report on the results, questions and methodology for this and all surveys can be found at tgam.ca/election-polls.

NDP Leader Jagmeet Singh spent the weekend campaigning in British Columbia, where he said his party would spend $100-million to help keep young people out of gangs. He also highlighted his party’s pledge to deliver on fighting climate change and tackling affordability, and he met with poet Rupi Kaur.

“B.C. families are struggling to afford a place to live and pay for the medicine they need and when they told Justin Trudeau they wanted action to fight the climate crisis, he bought a pipeline instead,” Mr. Singh said in a news release.

Green Party Leader Elizabeth May campaigned on Vancouver Island on Saturday and in Vancouver on Sunday. 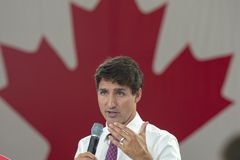 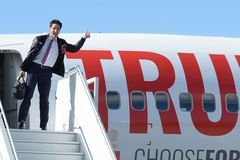