The Liberal government has delivered billions of dollars in tax breaks for businesses in an economic update that gives priority to incentives for new corporate investment over shrinking the federal deficit.

Wednesday’s fall economic statement revealed Ottawa now expects billions more in revenue over the next five years than it was counting on at the time of the February budget thanks to stronger economic growth. But the new tax breaks for businesses, and spending announced since the budget, mean future deficits will be slightly larger.

The February budget projected five years of deficits totalling $78.3-billion, and Wednesday’s update revises that to $83.5-billion. While the update does not set a timeline for erasing the deficit, it says the federal debt is on track to decline gradually when measured as a percentage of GDP.

The update announced $15.7-billion worth of new measures over five years, of which $14.8-billion is devoted to business tax breaks and programs to expand trade and innovation. It also included $12.1-billion in postbudget measures, such as support for steel and aluminum producers and repairing the rail line to Churchill, Man.

In releasing his fall economic statement on Wednesday, Mr. Morneau told the House of Commons that while his Conservative critics want him to shrink the deficit, the Liberals decided that responding to the U.S. tax cuts is more pressing.

“We could have ignored the concerns of business leaders… and we would have had a lower deficit as a result,” Mr. Morneau said. “To do so would be neither a rational response, nor a responsible one.”

The U.S. plan cut corporate and personal tax rates and allowed businesses to deduct the cost of new investments in machinery and equipment immediately rather than over the life of the asset. In response, Mr. Morneau’s update leaves corporate and personal tax rates unchanged but announces similar deductions for capital costs to those in the United States.

The business-tax incentives are effective as of Nov. 20 and are expected to cost $486-million in foregone federal revenue in the 2018-19 fiscal year that ends March 31. The incentives account for almost all of the new measures in the update that apply to the current fiscal year. Previously announced spending that took place since the February budget amounts to $3.5-billion in 2018-19.

Conservative Party finance critic Pierre Poilievre said the update shows the Liberals will break their 2015 campaign promise to balance the books before the next election.

“Like most Canadians, we have come to accept that these Liberals never take responsibility for anything," he said. "But what is startling about this particular statement is that they just go on doing more and more damage to the fiscal situation of this country without any concern or hesitation.”

NDP Leader Jagmeet Singh called the update a “massive” corporate giveaway that will place an increased burden on Canadians to fund government services through their personal taxes. Mr. Singh said the update fails to address affordability concerns such as out-of-pocket medical expenses.

A large part of the update attempts to make the case – leading up to the 2019 election – that Liberal government policies adopted since 2015 deserve credit for Canada’s stronger economic performance.

“Our plan to grow the economy is working, because people are working,” Mr. Morneau said.

The Finance Minister’s upbeat assessment is in sharp contrast to this week’s economic headlines, which include steep losses on financial markets and strong concern in the energy sector about record low oil prices for Canadian crude.

Mr. Morneau’s speech briefly mentioned “very low” market prices for crude oil as a challenge for the economy. He told reporters on Wednesday the new tax breaks on investment will also benefit the oil and gas sector.

The update includes the finance department’s long-promised assessment of how the U.S. changes affect Canada’s competitiveness.

“The U.S. federal tax reform has significantly reduced the overall tax advantage that Canada had built over the years, posing important challenges that, if left unaddressed, could have significant impacts on investment, jobs and the economic prospects of middle-class Canadians,” the government states in the update.

It also suggests that the full package of U.S. tax cuts is not sustainable, pointing to estimates that it will add $1.5-trillion to the U.S. deficit over the next decade. 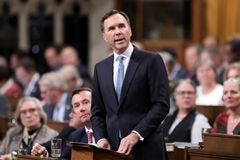 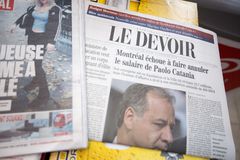 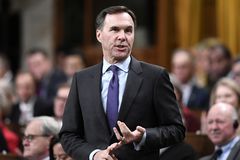