Families were once again the main target of campaign messages from the Liberals and the Conservatives on Tuesday as the two parties set their sights on taking a lead in the neck-and-neck race.

The parties have spent the past seven days focusing on social programs and spending, policies they hope will catch the attention of mothers, according to pollster Nik Nanos. The goal, he said, is to break the log jam in the polls.

The focus is on women in particular because many of the fluctuations in the polls come from that demographic, Mr. Nanos said.

The Liberals have to do “very well” among female voters to form government, Mr. Nanos said, while the Conservatives must at least be competitive with women to best the Liberals in the Oct. 21 election.

In Winnipeg, Conservative Leader Andrew Scheer announced a plan to boost government contributions to Registered Education Savings Plans (RESPs) from 20 per cent to 30 per cent, to a maximum of $750 a year. The extra cash would be in addition to the top-up that low-income earners already get from Ottawa on their RESPs. An estimate from the Parliamentary Budget Officer (PBO) says the promise would cost more than $600-million fully implemented.

The change would “help even more Canadians provide their kids with a smart start,” Mr. Scheer said.

Lindsay Tedds, a professor in the University of Calgary’s department of economics, said Mr. Scheer’s policy would not change who can afford to save the money needed to get the contribution. Research from University of British Columbia economics professor Kevin Milligan said RESPs are mostly used by “high-income, high-wealth and high parental education households.”

In St. John’s, Liberal Leader Justin Trudeau said a re-elected Liberal government would make maternity and parental benefits tax-free. The party also said it would extend parental leave benefits to people who adopt and increase the Canada Child Benefit by 15 per cent in the first year of a child’s life.

The Liberals did not release an independent costing from the PBO, but said they estimate the policies would cost $1.2-billion fully implemented.

Mr. Trudeau is also promising a guaranteed paid family leave for parents who don’t qualify for benefits through Employment Insurance (EI). The policy has not been costed.

“People should be focused on spending time with their baby, not worrying about how they’ll pay their bills," Mr. Trudeau said.

The Conservatives have also promised to remove taxes for parental leave, but they would do this through a non-refundable 15-per-cent tax credit – meaning that, depending on the tax rate on a parental benefit, some people could still pay tax on it. According to the PBO, the measure would reduce federal revenues by more than $1-billion a year once fully implemented.

Prof. Tedds said the policy with the “biggest benefit” would be the increase to the Canada Child Benefit, because every parent would get it. The different tax changes for maternity and parental leave would still exclude the 15 per cent to 20 per cent of parents who don’t qualify for leave through EI, and would disproportionately benefit middle- and higher-income earners, she said. For example, not making the tax credit refundable would reduce the potential benefit of the Conservative proposal for lower-income earners.

The poll was sponsored by The Globe and Mail and CTV, with a total of 1,200 Canadians surveyed from Sept. 14 to 16. It has a margin of error of 2.8 percentage points, 19 times out of 20. Respondents were asked: “If a federal election were held today, could you please rank your top two current local voting preferences?” A report on the results, questions and methodology for this and all surveys can be found at http://tgam.ca/election-polls.

Meanwhile in Ottawa, housing affordability was the focus of an event at which New Democrat Leader Jagmeet Singh announced an NDP government would build 500,000 affordable housing units over the next decade.

“A lot of people are struggling to find housing,” Mr. Singh said. “We know we can do a lot more.” 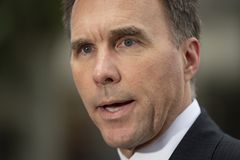 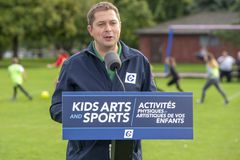 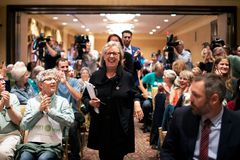 Follow Janice Dickson, Michelle Carbert and Marieke Walsh on Twitter @janicedickson @michellecarbert @mariekewalsh
Report an error Editorial code of conduct
Due to technical reasons, we have temporarily removed commenting from our articles. We hope to have this fixed soon. Thank you for your patience. If you are looking to give feedback on our new site, please send it along to feedback@globeandmail.com. If you want to write a letter to the editor, please forward to letters@globeandmail.com.
Comments