Prime Minister Justin Trudeau is calling for unity in his government’s Speech from the Throne, acknowledging that a minority mandate will require Members of Parliament to work together to fight climate change, cut taxes for the middle class and continue reconciliation with Indigenous people.

The governing Liberals’ speech emphasizes the vow to fight climate change, saying the government will set a target to achieve net-zero emissions of greenhouse gases by 2050, an “ambitious, but necessary” goal. The government’s first act, the speech says, will be to cut taxes for all but the wealthiest Canadians. Reconciliation with Indigenous people remains a priority, the speech says, and vows the government will work with Indigenous leaders to develop legislation on issues such as health care and mental-health services.

The speech, which Governor-General Julie Payette delivered on Thursday afternoon in the Senate, marks the opening of a new Parliament. Because the Liberal government did not win the majority of seats in the House in the October election, it will require the support of other parties.

“We open this 43rd Parliament with a call for unity in the pursuit of common goals,” Ms. Payette read from the speech.

Bloc Québécois Leader Yves-François Blanchet quickly ended any suspense over the government’s future, saying his party would vote in support of the Throne Speech.

Mr. Blanchet said the speech contained many positive measures to work on in the next Parliament. He noted that it did not specifically refer to oil production in the west or to pipelines, which he said would have been non-starters for his party.

“I’m going to support the speech because I see many opportunities for us … to get things, to make some gains for Quebec," Mr. Blanchet told reporters.

Conservative Leader Andrew Scheer called the speech “disappointing” and said his party would propose an amendment on Friday.

“It will highlight the things that we believe should have been in this speech, the missed opportunities,” he said.

Mr. Scheer said the speech was an opportunity for Mr. Trudeau to show that he has “learned the lessons of the last election … but instead we’re seeing much more of the same.”

NDP Leader Jagmeet Singh said he is not happy with the speech, but wavered on whether his party will support it, repeating “it’s not good enough,” but not ruling out voting in favour. Mr. Singh said he wants real commitments to improve peoples’ lives, including a single-payer pharmacare program that is universal and publicly delivered.

The Throne Speech makes repeated nods to the regional divisions reflected in the election result, and to Canada’s struggling oil-and-gas sector. At the same time, it makes fighting climate change the priority – a policy area that has already inflamed anger in the oil patch.

Echoing promises from the Liberal election platform, the government is pledging to take “ambitious climate action now,” noting that a “clear majority” of Canadians voted for that in October.

Incentives for home and building retrofits, zero-emissions vehicles, and clean technology companies are all on the list of policies the Liberals say they will implement. As are promises to make clean power available in all Canadian communities and to protect one quarter of Canada’s land and oceans by 2025.

Acknowledging the difficulty of balancing climate action with support for the natural resources sector, the Throne Speech says the government will “work just as hard” to get resources to new markets and offer “unwavering support” to workers in this industry.

Elizabeth May, parliamentary leader for the Greens, said her party will not support the Liberals on any confidence votes “until and unless” they significantly increase their emissions reduction targets for 2030.

While the Liberals made their priorities clear, references to working together were woven throughout the speech.

“The mandate of this recent election is a starting point, not the final word. The government is open to new ideas from all Parliamentarians, stakeholders, public servants and Canadians," Ms. Payette read in the conclusion.

Recognizing NDP priorities, the speech says universal dental care is “worth exploring” and briefly mentions pharmacare. The speech calls it the “key missing piece” of universal health care and says government will work toward a national pharmacare program.

In an acknowledgment of the Conservative Party’s campaign promises, the speech also says: “Whether it’s fighting money laundering or making parental benefits tax-free, there are good ideas across parties, and this government is ready to learn from you and work with you in the years ahead.”

The speech closed by saying “some believe” minority governments cannot accomplish anything, “but Canada’s history tells us otherwise."

“In this 43rd Parliament, you will disagree on many things. But you will agree on a great many more. Focus on your shared purpose: making life better for the people you serve.”

Opinion
In game of parliamentary survival, Liberals choose to go to the left rather than bridge divide with the Prairies
Subscriber content
December 6, 2019 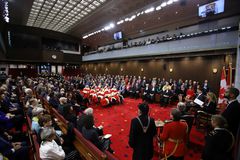 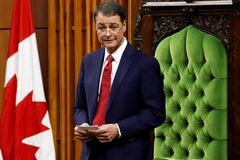 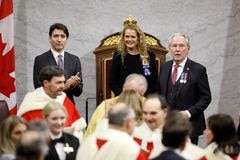