Family members who have been separated for months by the closing of the Canada-U.S. border will finally be able to reunite with loved ones in Canada, says Prime Minister Justin Trudeau.

The federal government is bringing in a “limited exemption” to allow immediate family members of Canadian citizens or permanent residents to come to Canada, Mr. Trudeau told reporters gathered outside Rideau Cottage on Monday.

“This is an incredibly difficult time to be apart from a spouse, a child or mom and dad. We hear that,” he said.

Those entering Canada from the United States will be required to quarantine for 14 days, Mr. Trudeau said, adding that people who do not follow the rules can face “serious penalties.” The new measure will come into force Tuesday at midnight.

Non-essential travel across the border was first restricted to all on March 21 for a 30-day period in an effort to stem the transmission of the novel coronavirus. The restriction was extended until May 21, and then again until June 21.

The partial closing of the border does not affect essential travel, such as truck and rail traffic carrying food and goods essential to supply chains, as well as travel to get to work. Flights between both countries continue.

The closing forced many couples and family members apart for months. In one case, a U.S. man was told travelling to Canada to attend the birth of his son was non-essential.

Gregg Keating is a Canadian who divides his time between the two countries. He and his American wife, Ginger, live in South Carolina, but he also owns a home and businesses in Canada. He told The Globe and Mail last month about his experience with the border closing, saying he drove to their home in Nova Scotia to check on his companies at the end of January, and that the closed border prevented him from returning.

He was devastated at the time, but said Monday after hearing the news that he is “elated.” “It’s absolutely great news. … I’ll be on the phone with her next,” he said of his plans to tell his wife.

Immigration Minister Marco Mendicino said the government recognizes that the border measures have been “difficult” on families who have been separated, and over the past couple of weeks developed a plan to reunite families.

A number of conditions must be met, he said, in order for the exemption to apply. Mr. Mendicino said immediate family members will be defined as spouses, common-law partners, dependent children and their children, parents and legal guardians. Immediate family members must plan to stay in Canada for at least 15 days, he said, and all other existing health protocols, including screening at the border, will remain in place.

“The purpose of this measure is not to allow people to come and go into Canada whenever they like, but rather to help Canadian families reunite during this unprecedented time,” he said.

Mr. Mendicino called the announcement an “incremental step” and one that the government will carefully monitor. He also said the measure only applies to family members travelling from the United States, not from other countries. 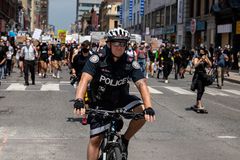 Opinion
After taking a knee, the next step is being spelled out for Justin Trudeau
Subscriber content
June 8, 2020 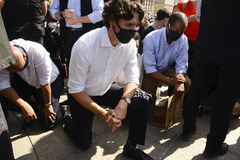