Conservative Leader Andrew Scheer pushed back against aggressive attacks from the NDP and Green Party leaders who are fighting for the same left-of-centre votes, while Liberal Leader Justin Trudeau skipped the first televised election debate.

The leaders clashed on the economy, social programs and climate change as they tried to articulate their positions at the Thursday debate hosted by Maclean’s/Citytv. But with a key player absent from the stage in Toronto, NDP Leader Jagmeet Singh and Green Party Leader Elizabeth May directed most of their attacks at Mr. Scheer.

The only representation Mr. Trudeau had at the debate was an empty lectern. The Liberals announced last week that he wouldn’t take part in the Maclean’s/Citytv debate or a Munk debate on foreign policy − both of which he participated in during the 2015 election. The Grits announced last week that Mr. Trudeau would only participate in the French- and English-language debates organized by the debate commission and a third debate hosted by Quebec TV channel TVA.

This was the first federal leaders debate for Mr. Scheer and Mr. Singh. After the formal leaders’ handshake at the top, Ms. May, the political veteran on stage, walked over to Mr. Trudeau’s empty podium and mimed shaking his hand.

Mr. Trudeau’s absence did not stop Mr. Scheer from taking every opportunity to compare his plans with Mr. Trudeau’s record while spending little time critiquing the plans laid out by Mr. Singh and Ms. May.

Mr. Scheer seized on Mr. Trudeau’s broken 2015 promise to balance the budget in four years, saying instead the Liberals left Canadians with “massive deficits as far as the eye can see."

He said he would balance the budget in five years by keeping the level of spending set by the Liberals but controlling it going forward. Mr. Scheer gave a “firm commitment” that he won’t cut programs and will continue “increasing education and health-care transfers.”

So far, none of the three leaders have released a costed platform.

Mr. Singh called for more government investments in things like housing, pharmacare and dental care because he said “its clear that families are struggling right now.” He accused the Liberals of making life less affordable but warned “Mr. Scheer’s going to do even worse.”

Mr. Singh said Mr. Scheer would end up cutting services like other conservative governments in Ontario and Alberta.

Ms. May said the Greens would also try to balance the budget within five years but said that target would take a back seat to her other priorities. “We need to massively expand services,” Ms. May said, saying the Greens would implement 100 per cent universal pharmacare, free tuition and a guaranteed income.

Early on, the debate quickly devolved into incomprehensible cross talk between the three leaders. But Mr. Scheer cut through the static, saying he’d found one point of consensus.

“I think we can all agree that Justin Trudeau is afraid of his record and that’s why he’s not here today,” Mr. Scheer said.

To which Ms. May replied: “we can now sing kumbaya and keep going."

The NDP and Greens agree on policies like pharmacare and a guaranteed income but with the two parties competing to win over progressive voters disenchanted with Mr. Trudeau, Mr. Singh and Ms. May spent much of the debate highlighting where they disagree on issues like greenhouse-gas emissions reduction targets.

The leaders concluded the night debating foreign policy, beginning with Canada’s deteriorating relationship with China. Mr. Singh said Mr. Trudeau made a “mess of the China situation,” adding his trip to India was also a disaster.

Ms. May said that anyone who gives an answer confidently on how to handle China “isn’t telling the truth,” and said U.S. President Donald Trump is “poking China with a stick and creating a trade war, and we are caught in the middle.”

She said Canada’s number one concern should be the safety of the two Canadians detained.

Mr. Scheer said Mr. Trudeau has failed to stand up to China, saying Canada can “show resolve” and stand up for itself.​

Instead of attending the first leaders’ debate, Mr. Trudeau spent the day in Western Canada.

Asked about his absence from the debate, Mr. Trudeau told reporters in Victoria that getting out across the country and speaking with Canadians is "at the core of what this election is all about.”

At a rally in Edmonton Thursday evening, Mr. Trudeau pointed to the government’s investments in Alberta’s oil and gas sector, particularly its purchase of the $4.5-billion Trans Mountain pipeline and expansion project last year. 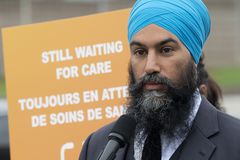 Follow Marieke Walsh, Janice Dickson, Kristy Kirkup and Michelle Carbert on Twitter @mariekewalsh @janicedickson @kkirkup @michellecarbert
Report an error Editorial code of conduct
Due to technical reasons, we have temporarily removed commenting from our articles. We hope to have this fixed soon. Thank you for your patience. If you are looking to give feedback on our new site, please send it along to feedback@globeandmail.com. If you want to write a letter to the editor, please forward to letters@globeandmail.com.
Comments