A member of the Conservative Party’s fundraising arm says he doesn’t believe the rules were followed when the party approved the use of donations to cover the private-school tuition fees of some of Leader Andrew Scheer’s children.

Louis Leger is the first member of the seven-person Conservative Fund to speak publicly since Mr. Scheer resigned and the fund dismissed executive director Dustin van Vugt last week. The use of party funds for the private Catholic school tuition fees of four of Mr. Scheer’s five children cuts to the core of the party’s anti-elite brand and has sparked a firestorm of debate within the party.

When asked whether he agreed that proper protocols were followed, Mr. Leger said simply, “No.”

The Conservative Fund is the not-for-profit organization that raises and spends money to fund the party.

Last week, Mr. van Vugt defended the use of party money for tuition, saying in a statement that "all proper procedures were followed and signed off on by the appropriate people.”

Mr. Scheer resigned as leader Thursday, a day after The Globe and Mail asked his office to verify whether the party was paying the tuition fees. He has not spoken publicly to any journalists since his resignation and has not issued any statements about the tuition fees.

On Sunday, a Conservative source said Mr. Scheer believes he followed party rules and was under the impression others involved in the payment had as well. The Globe is not naming the source so they can discuss internal party matters.

Mr. Leger, who is also the chief of staff to New Brunswick Premier Blaine Higgs, was in Ottawa for the meeting between Mr. Higgs and Prime Minister Justin Trudeau Monday morning. Speaking with The Globe outside the Prime Minister’s Office, Mr. Leger said he didn’t know that party funds were being used for private-school tuition. Mr. Scheer receives a salary of more than $260,000 a year as Opposition leader, and his housing in Ottawa is paid for by taxpayers.

Mr. Leger said the chair of the fund, former senator Irving Gerstein, also didn’t know about the payments. Several sources have told The Globe that Mr. Gerstein signed off on paying the difference in schooling costs between Regina, where Mr. Scheer’s riding is located, and Ottawa.

Mr. Leger said he was in a meeting that included Mr. Gerstein, Mr. Scheer and Mr. van Vugt and that the tuition costs were not discussed.

“I was there as well," Mr. Leger said. “There was no discussion of private school funding.”

Asked if it’s possible there was another meeting with Mr. Scheer and the Conservative Fund, Mr. Leger said, “No.”

Mr. Scheer’s spokesperson, Simon Jefferies, did not provide a response to Mr. Leger’s comments and instead pointed The Globe to Mr. van Vugt’s statement from last week.

Mr. Leger declined to give any reason for Mr. van Vugt’s dismissal, saying only: “He was asked for his resignation, but he wasn’t fired.”

The internal dispute comes as leadership contenders start to organize behind the scenes. No high profile people have officially entered the race, but the list of Conservatives who haven’t ruled it out is growing. Asked Monday if he will run for leader, Ottawa-area Conservative MP Pierre Poilievre wouldn’t rule it out, saying its “far too early” to decide. The party’s National Council has three meetings scheduled this week to discuss the formation and membership of the party’s leadership committee. 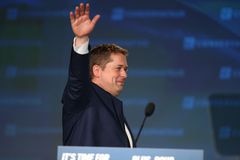 Opinion
With Scheer’s exit, will the Tories get serious about climate change?
Subscriber content
December 13, 2019 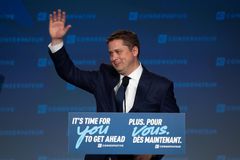