When Japanese Prime Minister Shinzo Abe visited Justin Trudeau over the weekend, they were two leaders talking about how their middle powers have to step into a vacuum of leadership, build alliances and deal with the new, two-superpower world.

But the undercurrent was that middle powers are still timid about doing that because they fear upsetting China and the United States.

The two leaders shared a similar assessment of how the world’s power shift affects the countries they govern.

China’s rising might means that middle powers such as Canada and Japan must worry about Beijing trying to impose its will, while its growing economy means it can’t be dismissed. (Mr. Trudeau got a fresh lesson about that when China responded to the arrest of Huawei CFO Meng Wanzhou by imprisoning two Canadians, Michael Kovrig and Michael Spavor.) The United States, under President Donald Trump, has turned protectionist on trade and less willing to bear the burden of international security.

Both Mr. Trudeau and Mr. Abe have similar notions about how to respond: band together with others and defend the notion that the world must work according to rules, not just power.

Foreign Affairs Minister Chrystia Freeland has filled speeches with the argument that Canada must step up to lead, in concert with others, because many Americans want to step back. Two weeks ago, Ms. Freeland joined a group of foreign ministers launched by her counterparts from France and Germany designed to defend multilateralism when Mr. Trump won’t.

Japan joined too, but with misgivings. Japanese officials won’t promote it when they host the G20 summit. They worry that it sends a pointed message that the U.S. is on its own and Japan desperately wants the U.S. to be part of the team. Their fear is the rise of Chinese might; they want the U.S. as the world’s leader, safeguarding Japan’s security. And they don’t want Beijing to see a split between Washington and Tokyo.

At Sunday’s joint news conference of the two prime ministers, Mr. Abe, who has sometimes courted the U.S. President in nearly sycophantic fashion, was careful not to poke a stick at Mr. Trump. “We should co-operate together so that the United States will be encouraged to be the leader of the liberal free world,” he said.

By the same token, Mr. Trudeau was cautious when Mr. Abe came calling with his own idea for dealing with a superpower, China.

The Japanese PM is urging countries to back the Free and Open Indo-Pacific, an initiative to rival Chinese influence both through military and security co-operation and through infrastructure initiatives.

And while Canada gave Mr. Abe the basics of what he wanted – an official endorsement in a communiqué – Mr. Trudeau described it like it wasn’t much of a change. He told reporters Canada would “continue” to take part in Pacific security matters, but didn’t point to any new thing Canada might do.

“What are those initiatives?” Jonathan Berkshire Miller, a senior fellow at the Japan Institute of International Affairs, asked in an interview. “When will they come?”

That’s part of Canada’s hesitating approach that comes from wariness about ruffling Beijing’s feathers. In its early days, the FOIP was sometimes portrayed as a U.S.-led initiative to counter Chinese naval power. Mr. Trudeau didn’t jump in with both feet.

It was almost ironic that Mr. Abe and Mr. Trudeau touted the 11-nation Trans-Pacific Partnership, a trade deal completed even after Mr. Trump withdrew the U.S., as an example of forging ahead without the Americans. After all, Mr. Trudeau had balked, delaying the deal for months, in large part out of fear it would interfere with NAFTA talks.

When one middle-power country calls for an alliance to deal with a superpower, others don’t always rush to join. When Mr. Kovrig and Mr. Spavor were detained, Canada sought statements deploring the action from allies and friends. A number of Europeans offered rhetorical support. Japan and South Korea and New Zealand didn’t; each counts China as its biggest export market.

As much as leaders like Mr. Trudeau and Mr. Abe speak about middle-power alliances around democratic values and a rules-based order, it turns out that a lot of those countries have relatively loose ties compared to the strong gravitational pull of the superpowers. No one can ignore their markets; many fear them or need them. And middle powers haven’t really put the political will into breaking free from their orbit. 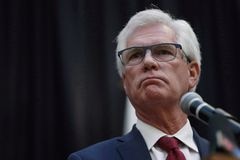 Opinion
Canada’s trade advantage with Japan could be short-lived
April 28, 2019 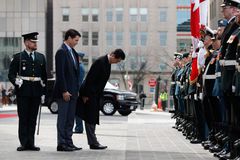 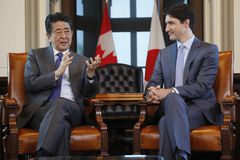