The Canada Infrastructure Bank’s first project will be a $1.28-billion, low-interest loan for Montreal’s REM light-rail line, a move that replaces Ottawa’s proposed equity position and frees up money for other Quebec projects on the eve of a provincial election campaign.

Prime Minister Justin Trudeau had proposed last year that the federal government would match Quebec’s $1.28-billion direct equity stake in the $6.3-billion project, which is led by Quebec’s pension fund. However, Mr. Trudeau also said funding could be replaced with an investment from the infrastructure bank once it was in a position to approve projects.

The REM, or Réseau express métropolitain, will be a 67-kilometre electric light-rail system running on new and existing lines that will connect several suburbs and the Montreal-Trudeau airport to the city’s downtown. The project is under construction and the first branch of the new system is scheduled to open in the summer of 2021.

Legislation to create the $35-billion Canada Infrastructure Bank was approved in 2017, but its permanent chief executive, Pierre Lavallée, was not appointed until May of this year. The bank’s funding includes $15-billion in cash and $20-billion in loans or equity stakes.

In an interview, Mr. Lavallée said the bank will seek “customized” arrangements with its investment partners, adding that a loan emerged as the best option for the REM project during negotiations. The agreement is in the form of a 15-year senior secured loan at a rate that starts at 1 per cent and rises to 3 per cent.

In his brief time on the job, Mr. Lavallée said, he’s been impressed with the quality of proposals coming into the bank.

“It’s really very encouraging – and frankly – exciting when I look at the interest and the type of transformational infrastructure projects that people are thinking about,” said Mr. Lavallée, who previously spent six years as an executive with the Canada Pension Plan Investment Board. “My experience is each investment has its own gestation period and its own life and it’s very difficult to predict when the conditions come together to get to an agreement, so I will hold off speculating on when the next one might come together.”

With the federal contribution to the light-rail line coming from the bank rather than the federal grant program for transit projects, Quebec will have more money coming from Ottawa. The province’s share of federal infrastructure funds for transit over the next decade is $5.2-billion and the original plan would have seen Ottawa contribute its $1.28-billion from that amount.

Alexandra Howell, a spokesperson for federal Infrastructure Minister François-Philippe Champagne, said other provinces could free up additional funds by approaching the infrastructure bank.

Matti Siemiatycki, an associate professor with the University of Toronto’s department of geography and planning, said the announcement provides a sense of the bank’s direction. He said it fits with Ottawa’s stated goal for the bank, which is to provide incentives for large pension funds to invest in Canadian infrastructure projects that generate revenue.

“I think this points to the type of deals they’re looking at,” he said.

Mr. Siemiatycki noted that the REM project is a complicated plan that will still require ongoing government subsidies, user fees and development charges near transit stations, but said the bank’s low-cost loans help provide the financing that large projects require to get started. 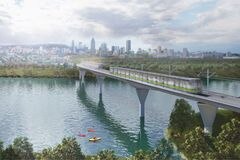