Finance Minister Bill Morneau has revealed that he reimbursed $41,366 to WE Charity Wednesday for travel expenses that the group covered for personal trips his family took to Kenya and Ecuador in 2017, prompting his second public apology this month related to his involvement with WE.

Mr. Morneau made the disclosure as he appeared before the House of Commons finance committee, which is reviewing the government’s now-abandoned plan to outsource the management of a $912-million student grant program to WE.

In his testimony, Mr. Morneau said that his wife and daughter travelled to Kenya in the summer of 2017 to learn about WE school projects. Then later that year, he travelled to Ecuador with his family to see and participate in WE’s humanitarian work in that country.

The minister said his family recently reviewed their personal records and found flight and hotel receipts showing that they covered $52,000 in expenses for a total of seven people over the two trips.

“However, we’re unable to locate receipts for any expenses related to WE programming, including accommodation. This was to my surprise,” he said. “Yesterday, I asked my assistant to reach out to the WE organization regarding these trips and for them to provide me with the amount of total expenses incurred.

“Today, I wrote a cheque in payment of $41,366. I expected and always had intended to pay the full cost of these trips, and it was my responsibility to make sure that was done,” he said.

“Not doing so, even unknowingly, it’s not appropriate. I want to apologize for this error on my part.”

Prime Minister Justin Trudeau and Mr. Morneau are under fire for failing to recuse themselves from the federal cabinet’s decision to outsource the program. Ethics Commissioner Mario Dion is currently investigating whether their involvement violated federal ethics laws. Mr. Morneau said he has forwarded details of his recent repayments to Mr. Dion.

Separately, the Prime Minister’s Office said Wednesday that Mr. Trudeau and his chief of staff, Katie Telford, will testify at the finance committee. Liberal MP and committee chair Wayne Easter said Mr. Trudeau has been invited to appear on Tuesday, July 28, but that the date has not been confirmed. The 28th is also the day the committee will hear from WE co-founders Craig and Marc Kielburger.

In his testimony, Mr. Morneau added that his family made two significant donations to the WE organization, each for $50,000. One in April, 2018 and another in June of this year. He said he and his family have long been passionate about education efforts in Africa and have personally donated more than $1-million to initiatives separate from WE to help refugee students from Kenya continue their education in Canada.

The Prime Minister first announced the Canada Student Service Grant program on April 22, but it was not until June 25 that the government said the work would be outsourced to WE Charity. The arrangement was cancelled on July 3 amid conflict-of-interest concerns.

Mr. Trudeau’s family members have been paid to speak at WE Charity events and Mr. Morneau’s daughter works at the organization. Both Mr. Trudeau and Mr. Morneau apologized earlier this month for not recusing themselves from cabinet’s decision on the WE contract.

Mr. Morneau told the finance committee, “I do not believe I had a conflict, although I fully recognize that there are legitimate questions about the perception of a conflict. In hindsight, I should have recused myself from discussions involving the WE organization and I will do so in the future.”

Late Wednesday, WE said in a statement that the two trips were part of the charity’s practice of offering complimentary tours for current and potential major funders of the charity so that they can see the international humanitarian projects first hand.

“WE Charity extended the invitation to Nancy McCain and Bill Morneau because they are well-known philanthropists with a history of significant donations to international development programs,” the group said.

“Yesterday, the Morneau-McCain family reached out to us to ask if, in fact, their trip had been complimentary. We confirmed that it was. They then reimbursed WE Charity for what they would have been charged if they had paid at the time: USD $4,395 per person.”

In a statement, the Prime Minister’s Office came to Mr. Morneau’s defence.

Referencing his work during the pandemic, she said “Minister Morneau is continuing to do this work that Canadians rely on.”

During his appearance, Mr. Morneau also provided a timeline of key events in the evolution of the government’s decision, including details of cabinet discussions that are normally secret.

Prior to Wednesday, the Liberals had largely limited their comments on the issue to saying that the program was approved on the advice of the public service and had declined to answer specific questions about the evolution of the decision or the role played by cabinet ministers and their political staff.

Mr. Morneau told the committee that he had a call with the Prime Minister on the evening of April 5 where they discussed the need to support students as a result of the pandemic. He said he asked his political staff and department officials the next day to start consulting other departments and youth organizations on potential options.

The minister said that on April 7, federal officials reached out to at least a dozen organizations, including WE. The charity then provided the government with a proposal on social entrepreneurship. WE has said this was shared on April 9.

During an April 18 briefing, the minister said officials concluded that a partnership with a third party may be necessary in order to launch such a large program in the speed required. He said WE Charity was raised during that discussion.

In separate testimony at the finance committee, Michelle Kovacevic, an assistant deputy minister in the Finance Department, said Mr. Morneau’s office spoke with WE on April 20 about the group’s “ability to deliver volunteer opportunities.” She said the result of the call was that WE would rework its April 9 proposal “to fully meet the policy objective of national service.”

On Tuesday, the minister’s office confirmed that it received another proposal from WE on April 21 that included a volunteer service element. Ms. Kovacevic said the second proposal from WE included a “service placement stream” but it was “not the ultimate proposal.”

Mr. Morneau said he verbally approved his department’s recommendations on the “broad parameters” of the grant program including the potential use of a third party on April 21. “To be clear, no third party such as WE was chosen or directed within this approval,” he said.

On April 22, the Prime Minister announced the student grant program.

“For complete transparency,” Mr. Morneau said he called Craig Kielburger on April 26. “I know that we would have broadly discussed the impact of the COVID-19 pandemic. He did not raise the Canada Student Service Grant, nor did I.”

On May 5, Diversity, Inclusion and Youth Minister Bardish Chagger presented her initial proposal for the grant, with WE Charity as the preferred administrator, at the COVID-19 cabinet committee, Mr. Morneau said, adding that he did not attend that meeting.

The final decision on the grant program was presented to the full cabinet on May 22, he said.

“As I’ve said, I should not have participated in that discussion and I regret that I did not recuse myself at that time. I provided approval on the final revised funding decision for the program on June 3. And that was my last direct engagement with the program’s development,” he said.

The Finance Minister’s admission on Wednesday related to the travel expenses prompted a call for his resignation from the Conservatives, who along with the NDP said Mr. Morneau broke the Conflict of Interest Act by not paying the full cost of the trips with WE.

“Minister, you have lost the moral authority to hold your office and it is the position of her majesty’s loyal opposition that you resign. Will you resign?” Conservative MP Pierre Poilievre said.

In response, Mr. Morneau said the failure to ensure that the expenses were paid was “absolutely a mistake on my behalf.”

“I will continue to work on behalf of Canadians,” he added.

“The issue here is that WE paid for your travel. That has the apparent perception of attempting to buy political influence,” NDP MP Charlie Angus said. He said it’s concerning that the minister “didn’t seem to think that that was a problem.”

It was also revealed Wednesday that the federal contract to administer the grant wasn’t signed with the well-known WE Charity, but rather a recently created affiliate called the WE Charity Foundation.

The relatively unknown foundation was incorporated in January, 2018 and registered as a charity in January, 2019, according to federal registries. WE Charity said it used the foundation to sign the contract to administer the $900-million program to pay students for volunteer work to ward against legal liabilities associated with it.

“Such liability could overwhelm WE Charity, and counsel advised that the contracting party would preferably be ‘WE Charity Foundation,’ " the WE organization said Wednesday in a statement.

The government did not provide an explanation for why the distinction wasn’t made clear when the contract was announced.

In a statement, Danielle Keenan, a spokesperson for Ms. Chagger, said the details of the agreement with WE were “negotiated at the officials level.” She said all of WE’s charitable entities were “implementing partners” with the grant program. 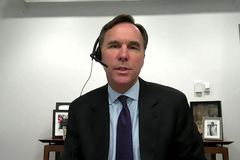