NDP Leader Jagmeet Singh has kicked MP Erin Weir out of caucus for failing to take “appropriate responsibility,” after an independent investigation found harassment and sexual-harassment claims against the Saskatchewan MP were “sustained” by evidence.

Mr. Weir, however, called the process “deeply flawed” and said he was ousted after he publicly defended himself, even though he agreed to mediation and training.

Mr. Singh told reporters on Thursday that he initially wasn’t going to expel Mr. Weir, but “recent developments demonstrate Mr. Weir is unwilling to take responsibility for his actions and, therefore, any rehabilitative approach is now untenable.”

In February, the party asked an independent investigator to look into the Regina MP following a second-hand complaint from fellow New Democrat Christine Moore, who sent an e-mail to caucus accusing her colleague of harassing women.

The investigation, led by University of Ottawa law professor Michelle Flaherty, found one claim of harassment and three claims of sexual harassment against Mr. Weir were “sustained by the evidence,” Mr. Singh said. The NDP said it would not release the report owing to confidentiality.

The NDP Leader did not go into details but said the sexual-harassment claims involved Mr. Weir’s failure “to read non-verbal cues in social situations” and the behaviour “had significant negative impacts on the complainants.”

“The report found that when Mr. Weir was told his advances were unwanted, he stopped,” Mr. Singh said.

In a statement on Thursday, Mr. Weir said he had no idea he had done anything unwelcome, but “it became clear that I was sometimes slow to pick up on social cues.” His office said Mr. Weir “had probably sat or stood too close to people at social events and engaged them in conversation more than they wished to speak with him.”

“I apologize to anyone who felt uncomfortable,” Mr. Weir said.

Mr. Singh said he considered various corrective resolutions including conciliation and he had believed “Mr. Weir was prepared to be accountable for his behaviour.”

But that scenario crumbled, Mr. Singh told reporters, after Mr. Weir “attacked” one of the complainants and gave details that could identify her when he commented about an incident Mr. Weir believed was the source of the harassment complaint.

In his statement on Thursday, Mr. Weir said he participated in the investigative process even as he suspected the party was “soliciting complaints” against him. He said there were no complaints from anyone he had authority over.

On Tuesday, CBC News reported that an unidentified complainant accused Mr. Weir of speaking to her in an angry and belligerent way. Mr. Weir then sent out a statement and gave interviews saying the complainant was a staff member in former NDP leader Tom Mulcair’s office who tried to prevent him from speaking on a resolution about the carbon tax at the 2016 Saskatchewan NDP convention. He called it “a trumped-up harassment complaint” and accused Mr. Mulcair and former caucus chair Charlie Angus of punishing him for questioning the carbon-tax plan.

NDP MPs said they didn’t know details about the allegations, but supported their leader’s decision to oust Mr. Weir.

“At the end, he expelled himself because there was no trust,” Quebec MP Alexandre Boulerice said.

Mr. Angus said if Mr. Weir had worked through the process with Mr. Singh, he’d still be in caucus. “We’re not in this to get him, but when you come out and your response is to say women came forward to make things up … how do you move forward as a caucus and have a respectful environment?”

In his statement on Thursday, Mr. Weir said he should be allowed to return to caucus. “Given the nature of the report’s findings, Singh’s initial decision to reinstate Weir was correct and constitutes the only just outcome,” it said.

Singh, caucus mum after meeting to discuss allegations made by NDP MP Erin Weir
May 2, 2018 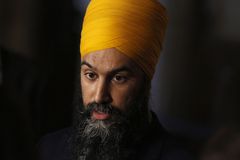 NDP MP alleges harassment complaint was retaliation for having questioned carbon-tax plan
May 1, 2018 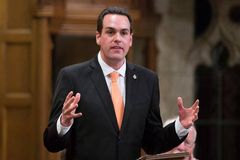