The National Gallery of Canada is preparing to back out of its largest sale ever after enduring weeks of controversy for putting a Marc Chagall painting on the auction blocks.

The federal institution is now working with Christie’s, the international auction house, to wind down the sale – a process that may come with a hefty financial penalty.

The decision was made at a heated meeting of the gallery’s board on Wednesday night and later shared with the government, sources who were not authorized to speak publicly about the decision said.

The sources said the National Gallery is worried about the effect of the controversy on its international reputation and its standing in the arts community. The climb down occurred two days after the director and chair of the gallery vowed to proceed with the auction despite widespread controversy.

Opinion: Selling one artwork to keep another? The NGC courts an age-old controversy

The National Gallery had been planning to sell the 1929 The Eiffel Tower canvas at a Christie’s auction house in New York on May 15 for an estimated US$6-million to US$9-million. The painting left the country earlier this year with an export permit and has been touring Christie’s international showhouses, including those in London and Hong Kong, to drum up buyer interest.

The National Gallery may be on the hook for a large cancellation fee, unless Christie’s chooses to waive it.

Bruce Bailey, a Toronto art collector who works with the Montreal Museum of Fine Arts on its acquisitions, said a standard cancellation fee for a work with that valuation would be about $1-million.

Still, he welcomed the National Gallery’s move to keep the Chagall painting.

“I think it’s wonderful news,” Mr. Bailey said. “I admire the fact that [the gallery] would listen to the lamentations, to the hue and outcry across the country.”

The federal institution said earlier that it had planned to make the unprecedented sale – the largest in its history – to raise the funds to buy the 1779 Jacques-Louis David painting Saint Jerome Hears the Trumpet of the Last Judgment for US$5-million. That painting is owned by the civil corporation of the parish of the Notre-Dame de Quebec, which has looked to sell it for two years to pay for upkeep at two historic Quebec City churches.

Gallery director Marc Mayer and former chief curator Paul Lang have said the National Gallery had to take extraordinary measures to buy the painting because it was in danger of being sold to a gallery overseas and they wanted to keep it in Canada.

The National Gallery’s plans got derailed this month when members of the art community decried the sale of the valuable Chagall and two Quebec museums said the David painting should remain with them.

The Musée de la civilisation in Quebec City, which is the legal depository of the David painting, and the Montreal Museum of Fine Arts, where the canvas currently hangs, have been attempting to raise money from public and private sources to buy the artwork instead.

The Quebec government moved this week to give Saint Jerome a special cultural classification that makes it more difficult for the piece to leave the province.

The David painting arrived in Canada in the late 1800s and was gifted to the parish of the Notre-Dame de Quebec in 1922.

On Thursday evening, the National Gallery confirmed that it would not be auctioning the Chagall, saying its goal from the start had been to keep the David in Canada.

“The work’s historic connection to our country and the province of Quebec is undeniable. Keeping the painting in Canada had been the intended result of considerable efforts by the National Gallery of Canada since 2016, when it was first offered for sale. We are pleased that this has been accomplished,” the Gallery said in an open letter. “We value the passionate views we heard in recent days on this matter and the public’s affection for the national collection.”

The National Gallery said as recently as Monday that it was pressing ahead with the Chagall sale, whether or not they ended up buying the David. An open letter signed by board chair Françoise Lyon and Mr. Mayer said the gallery would use the proceeds from the Chagall sale to establish a “financial safety net” to buy artwork in danger of leaving Canada.

The gallery’s annual acquisition budget is $8-million. Mr. Lang said this week the budget is shared by six arts departments at the National Gallery and could not be used almost in its entirety for a single purchase. 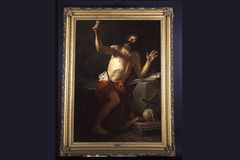 Quebec moves to protect David painting sought by National Gallery
April 24, 2018
Follow Daniel Leblanc and Chris Hannay on Twitter @danlebla @channay
Report an error Editorial code of conduct
Due to technical reasons, we have temporarily removed commenting from our articles. We hope to have this fixed soon. Thank you for your patience. If you are looking to give feedback on our new site, please send it along to feedback@globeandmail.com. If you want to write a letter to the editor, please forward to letters@globeandmail.com.
Comments are closed