New Brunswick’s two major political parties have each dropped a candidate in the provincial election after social media post about the LGBT community surfaced.

Blaine Higgs said he was disturbed by the reposting of a transphobic meme by Roland Michaud that suggested physical violence against transgender women when they use washrooms.

Higgs said during a news conference in Saint John late in the afternoon that the post was missed during the vetting of Michaud’s candidacy and he only became aware of it early on Labour Day.

The leader said he was particularly disturbed by the violence described in the post, adding that inciting aggression is unacceptable for a political candidate.

Michaud posted Monday night on Facebook that he had apologized for circulating the meme and he didn’t intend to withdraw his name from the race.

“I’m a blue collar, ordinary guy just like you and ordinary people make mistakes. I’ve admitted to that and I’ve apologized but I’m only human just like you and I’m sure many of you have made mistakes over the years also. I’m asking you to give me a chance,” he wrote.

“I’m still on the ballot for Victoria-La Vallee and I can still be the voice that you folks need. So please vote Roland Michaud. Give me the opportunity to prove to you who I am.”

Higgs said during the news conference that with the revelation of the December 2018 post coming just a week before the Sept. 14 election, Michaud’s name would remain on the ballot and the Tories will be unable to provide a fresh candidate.

However, Higgs said the party is asking Michaud to remove its signs and it will not accept Michaud into caucus should he be elected.

Also Monday, the Liberal party announced it was cutting ties with its candidate in St. Croix.

“It is unfortunate the people of St. Croix will not have a choice to vote Liberal in the important election,” Vickers said in a statement Monday night.

“But once comments came to light, we quickly informed the candidate we would be moving ahead without him.”

In a 2017 post, Gardner said, “In an age of sanitizing history and not offending anyone, isn’t it time the LGBT community stop offending the Christian and Jewish community and stop using the rainbow as their symbol, as it has a strong biblical significance?”

Gardner said in a statement Monday that he is also a member of the LGBT community and works in a business where they fly the rainbow flag.

“My comments, while on the outset, appear to be homophobic were pointing out the way in which we all fight for our rights, and sometimes conflict with what others consider to be their rights,” he said in a statement.

He added that he will now be running as an Independent in the election.

At dissolution, the Progressive Conservatives and Liberals each had 20 seats in the legislature, while the Greens and the People’s Alliance each had three. There are two vacant seats and one Independent.

Higgs said that it wasn’t a difficult decision to ask Michaud to withdraw, even as his party seeks to win additional seats in hope of forming a majority government.

“It’s a message we have to send across the province. We have higher standards we must uphold and follow,” he said.

The Tory leader said he will raise questions about his party’s vetting process for candidates, agreeing with a reporter that finding the offensive post wasn’t particularly difficult.

“I will ask the questions of the vetting process … There is a process that needs to be followed and followed diligently,” he said.

Alice McKim, a candidate for the Liberal party who is a transgender woman, said the comment by the Tory candidate was inciting violence and was contrary to the province’s Human Rights Act.

“The degradation of this type increases the likelihood of the degraded to become victims of crime and decreases the inhibition of others to harm us,” she said in Saint John. 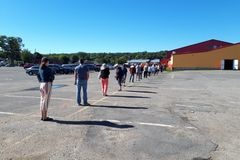 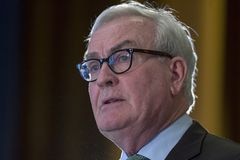 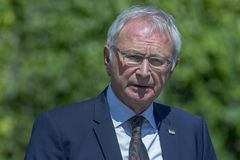