Jagmeet Singh, who was elected more than 10 months ago to head the federal New Democrats, is expected to declare himself to be his party’s candidate in a Vancouver-area riding that will soon be vacated by a member of his NDP caucus.

Running in a by-election in Burnaby South, which the NDP won by fewer than 600 votes in 2015, presents a political risk for Mr. Singh, who was a provincial MPP in Brampton, Ont. But, so too would passing on the opportunity to compete in a riding where voters have leaned New Democrat for decades.

There have been a handful of federal by-elections held since Mr. Singh was named NDP Leader last Oct. 1. None of them were in seats recently held by New Democrats and Mr. Singh expressed no interest in trying his luck.

Burnaby, however, is a different story.

If he runs in Burnaby South and loses, “it’s bad” for the NDP, said Barry Kay, a political science professor at Wilfrid Laurier University in Waterloo, Ont. But, Mr. Kay said, it would also be embarrassing for the party if he did not run. “It just looks like he’s been sitting it out because he doesn’t have confidence in being able to win,” he said.

Mr. Singh has scheduled a news conference for Wednesday in the constituency held by New Democrat MP Kennedy Stewart, who is stepping down to run for mayor of Vancouver.

The NDP Leader “is doing a special event in Burnaby and people have been asking him to run. So he should probably answer those encouragements,” Guillaume Francoeur, an NDP spokesman, said Tuesday.

Media have been speculating for weeks that Mr. Singh would jump into the race in Burnaby South. Parts of the riding were previously held by Svend Robinson, an outspoken and long-serving New Democrat MP, and also by Tommy Douglas, the party’s first leader.

Mr. Kay said he believes Mr. Singh’s odds in Burnaby are reasonably good. The narrow margin of victory for Mr. Stewart in 2015, he said, could be attributed to a late-campaign surge by Justin Trudeau and the Liberals.

“The question will be whether the Liberals want to really take a run at him” this time, Mr. Kay said. “The Liberals may actually put a lot of effort into trying to block him if they think that if they can defeat him. [That would] hurt the NDP a year from now which is the big payoff" in the general election.

Tracking of public opinion conducted weekly by Nanos Research suggests only about one-third of Canadians believe Mr. Singh has the qualities of a good political leader, lagging behind Mr. Trudeau and Conservative Leader Andrew Scheer.

Nik Nanos, the founder of the research firm, said Mr. Singh needs to develop a distinct vision and explain how it differs from that of the Liberals. “The progressive-leaning Liberals have encroached on the policies of the NDP leaving less room for the NDP,” Mr. Nanos said. “Getting in the House of Commons is a key first step in bolstering his image and building a platform for more visibility.”

The New Democrats, meanwhile, are suffering financially. In the latest quarter, the federal party raised just $872,401, compared to the $3,099,217 that was raised by the Liberals and the $6,045,466 that was raised by the Conservatives. Having the NDP Leader in the Commons could prompt more donors to open their wallets.

Running in Burnaby South would be a risk for Mr. Singh, said Rick Smith, the executive director of the Broadbent Institute, a social democratic think tank founded by former NDP leader Ed Broadbent.

“But the first racialized leader of a federal political party in Canada is used to taking risks,” he said. “So I think, on balance, it’s a good move for Jagmeet Singh.” 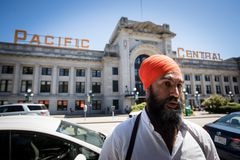