NDP Leader Jagmeet Singh said the federal government must act quickly to combat hate speech online in light of this week’s deadly attack on a Muslim family in London, Ont.

Concrete steps should include long-promised legislation that forces online platforms to quickly remove illegal hate speech upon notice, he said. Other measures could include new guidance for Canada’s police and national security forces.

“We know that online hate is radicalizing people,” Mr. Singh said. “We cannot leave it to YouTube or to Mark Zuckerberg at Facebook to regulate hate. They don’t have an interest in doing that. ... It is up to us to make sure that hateful messages that are put out purposely to divide and create hate, that drive people to do acts of violence and acts of terror against people like the Muslim community, that has to end. And we need to see that action and the Liberals have been delaying for far too long on this.”

Attack on Muslim family in London, Ont.: What we know so far about the killings and suspect

Islamophobia begins with ideas. It always ends in violence

Federal security agencies should also focus their efforts on protecting Muslims from far-right hate groups, he said, adding that too often it is Muslims themselves who feel targeted by those agencies.

Several Muslim leaders called on governments to act as they spoke Tuesday evening at a London vigil honouring the family, asking for measures against hate groups and a national summit on Islamophobia.

Four members of the same family were killed Sunday evening after they were struck by a man driving a pickup truck: Salman Afzaal; his wife, Madiha Salman; their 15-year-old daughter Yumna Salman, and Salman Afzaal’s mother. Salman and Madiha’s nine-year-old son, Fayez, is still in hospital.

London police Chief Steve Williams said this week that it is believed the victims were intentionally targeted because of their Islamic faith.

The federal Liberals made several promises to address online hate speech during the 2019 election campaign. The platform included pledges to boost funding for organizations working to prevent radicalization and extremism, and to force platforms to remove hate speech within 24 hours of notice or face significant penalties.

“This government has taken many steps, but we know there is more to do,” he said. “We will work hand in hand with the Muslim community and with all Canadians to stand against this violence.”

Conservative Leader Erin O’Toole said in a statement provided by his office that his party will review the promised legislation once it is tabled.

“Conservatives condemn all forms of hate speech and speech that incites violence on social media,” he said.

Craig MacBride, a spokesperson for Public Safety Minister Bill Blair, said in a statement that the government is “exploring” how online platforms can be more transparent and accountable. “We want to make it an active duty for platforms to monitor and rapidly remove illegal content before it causes harm.”

Keira Lawson, a spokesperson for the Canadian Security Intelligence Service, said in a statement that the agency works to establish trust with communities to understand the “extremist landscape.”

“CSIS continues to closely monitor the evolving threat posed by ideologically motivated violent extremists and can employ a variety of national security tools currently at our disposal where appropriate.”

With files from Ian Bailey 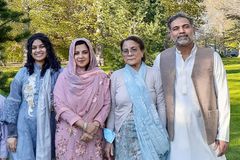 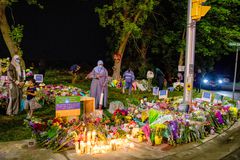 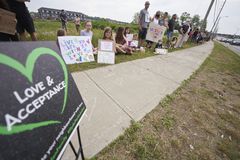