In a surprise statement on Thursday, Mr. Singh said his party won’t “prop up” a Conservative government if the NDP holds the balance of power after the fall election. Some New Democrats say the comment sends the message that the NDP does not expect to win.

Mr. Singh was responding to a video the Liberals had circulated of Conservative Leader Andrew Scheer arguing against same-sex marriage in 2005. The Conservatives say Mr. Scheer would not change the law that allows same-sex unions, but refuse to say whether the leader’s personal views have changed, and won’t explain why he doesn’t march in Pride parades.

Mr. Singh said he would never support a Scheer government because the NDP can’t trust the Tories to “champion the fundamental rights of Canadians.”

In an interview with The Globe and Mail on Friday, Mr. Singh said speculating about a minority election result doesn’t mean he’s given up on Canada’s top job.

He said he felt compelled to distance himself from the Tories after seeing the video of Mr. Scheer’s 14-year-old speech. “I wanted to make it clear, given all that we’ve heard, where I stand,” Mr. Singh said. He refused to clarify on Friday whether the NDP would prop up a minority Liberal government.

It’s rare for a party leader to take options off the table so early in an election cycle, and the move is a departure in tradition for the NDP.

Since becoming leader in 2017, Mr. Singh has struggled to galvanize support for the third-place party. Less than two months before election day, the New Democrats trail the Conservatives and Liberals in fundraising and public-opinion polls, and are even behind the Greens in nominating candidates. The NDP has nominated 164 candidates out of a possible 338, and so far has none at all in New Brunswick or Prince Edward Island.

Even though the party is in an uphill battle, two former New Democrat MPs say Mr. Singh’s statement about the Conservatives sends the “wrong message."

“You don’t campaign to finish third,” Françoise Boivin said. “You present yourself as the future leader with the best platform.”

She said Mr. Singh’s frankness on the subject will make it more difficult to motivate volunteers and campaign staff to pound the pavement during the election. Her former colleague Peter Stoffer added that it will also put more roadblocks in front of the candidates running under the NDP banner.

“In a way, it’s a concession," Mr. Stoffer said. “When you’re on the door step and people ask, ‘What can you do for us,’ if you can’t be in government, then your party platform doesn’t mean very much.”

He also warned that if voters don’t give any party a majority mandate, the NDP will hold less leverage in the subsequent talks. “In a poker game, you don’t show your hand at the beginning,” Mr. Stoffer said.

When Canada had three minority governments in the early 2000s, Mr. Layton “held everybody’s feet to the fire,” said Mr. Reid, who worked in Liberal prime minister Paul Martin’s government. “If you are not an unpredictable partner, then you have no leverage.”

Mr. Singh’s statement has support from his current caucus. NDP MP Charlie Angus said his party is being straight with the electorate and saying: "We have a bottom line of what we will and won’t support.”

His colleague Nathan Cullen, who isn’t seeking re-election, echoed Mr. Angus - with both saying it wasn’t a concession. 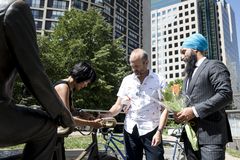 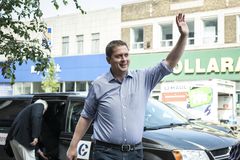 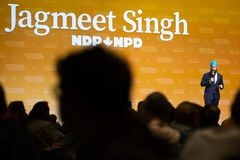