The NDP says it can raise $130-billion in new revenue over four years by hiking taxes on corporations and high-income Canadians and by closing offshore tax loopholes.

The NDP released its costed platform Friday, the first day advance polls were open across the country.

At an event in Ottawa, NDP Leader Jagmeet Singh unveiled his party’s detailed costing plan for how his party would pay for its big-ticket spending promises in areas such as national pharmacare and billions for affordable housing and public transit.

“We know we can do these things. We know we can invest in housing and make these choices. We can also ask the wealthiest to pay a little bit more so we can make these investments in people,” Mr. Singh told reporters.

The NDP’s plan involves raising the corporate tax rate by three percentage points, increasing the tax rate on income above $210,371 from 33 per cent to 35 per cent and adopting measures to eliminate corporate tax writeoffs and close avenues for offshore tax avoidance.

When asked about the prospect of wealthy Canadians using the help of accountants to help skirt his proposed tax hike, Mr. Singh said it is “a real fear that people have raised,” but added that his party was advised it would cost more to try to hide money than it would be to pay the tax.

The main difference between the two party platforms is the size of new spending and tax increases. The NDP’s four-year spending plan of $130-billion is more than double the $56.9-billion proposed by the Liberals. The NDP’s plan to raise $130-billion in new revenue is more than five times the $25.4-billion the Liberals plan to find through tax increases and spending reductions.

However, the NDP’s fiscal plan totals are less than half the size of what the Green Party is proposing. The Green platform promises $293-billion in new spending over four years and $288-billion in new revenue over that time.

The NDP’s revenue-raising plans are supported by individual estimates prepared by the Parliamentary Budget Officer. However, most of those PBO reports caution that there is a high degree of uncertainty when predicting revenue gains from higher taxes on the wealthy and corporations, because research shows that such policies tend to generate accounting efforts to avoid paying the higher taxes.

For instance, one PBO report analyzes the NDP’s plan to raise the portion of capital-gains income – such as the profit earned from buying and selling stocks or investment properties that are not a primary residence – that is taxable from 50 per cent to 75 per cent on corporations and individuals.

The PBO said this measure alone would raise more than $8-billion a year in new federal tax revenue. However, it also cautioned that such calculations are challenging.

“This estimate has high uncertainty due to the likelihood of aggressive tax planning and evasion,” the PBO states. “Tax literature suggest that higher income individuals are more responsive to tax-policy changes. Depending on the timing and final design of this policy, there could be significant volatility in personal and corporate income-tax revenues, particularly in the short term.”

In an effort to acknowledge that uncertainty, the NDP offers two sets of numbers: one that sets aside about $20-billion over four years as a contingency fund in case those revenue projections fall short, and then a bottom line that does not include the contingency.

Under both scenarios, the federal debt-to-GDP ratio would decline each year.

The Institute of Fiscal Studies and Democracy, which has been assessing the fiscal credibility of election platforms, found that the costed NDP platform merited an overall “pass" for making realistic economic assumptions and for displaying responsible fiscal management. However, the party received a failing grade with respect to transparency. The group said that the NDP’s costed platform should have been released before the official debates and well before advance polls opened.

With all of the leaders’ debates now over and just over one week left in the election, the Liberals and Conservatives remain deadlocked in the public opinion polls.

According to Friday’s daily tracking survey from Nanos Research, the Liberals sit at 35-per-cent support, while the Conservatives are at 33 – all within the margin of error. The New Democrats are at 15 per cent, the Greens at 9 per cent, the Bloc Québécois at 5 per cent and the People’s Party at 1 per cent.

The poll was sponsored by The Globe and Mail and CTV, with a total of 1,200 Canadians surveyed from Oct. 8 to Oct. 10. It has a margin of error of 2.8 percentage points, 19 times out of 20. Respondents were asked: “If a federal election were held today, could you please rank your top two current local voting preferences?” A report on the results, questions and methodology for this and all surveys can be found at http://tgam.ca/election-polls. 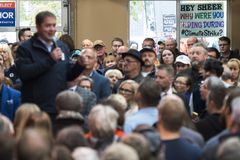