All federal opposition parties will unanimously support an NDP motion to accelerate efforts to document unmarked graves at residential schools and drop legal battles against Indigenous people, but the Liberals are keeping mum on how they will vote.

On Thursday, the NDP tabled a motion to fund and speed up the implementation of the Truth and Reconciliation Commission’s calls to action on burials and missing children, which include investigating unmarked graves and establishing and maintaining a registry of burial locations. Last week, the Tk’emlúps te Secwépemc First Nation announced that the bodies of 215 children were found in unmarked graves at the former Kamloops residential school.

The Conservatives, Bloc Québécois and Greens said they would support the motion tabled by NDP Leader Jagmeet Singh, which will go to a vote on Monday. The Liberals did not respond to The Globe and Mail’s request for comment on the matter.

“Symbolic gestures are not good enough – we need concrete action,” Mr. Singh said in the House of Commons on Thursday.

In the release of its report in 2015, the Truth and Reconciliation Commission was confident that there were several unknown burial sites at residential schools, former commission chair Murray Sinclair told a House of Commons committee Thursday. But since then, “nothing has been done,” he said, adding the inaction speaks to the “lack of commitment” from the government.

In the 2019 federal budget, the government earmarked $33.8-million over three years to develop and maintain the National Residential School Student Death Register and to work with parties to establish and maintain an online registry of residential school cemeteries. This week, Ms. Bennett announced that $27-million, which had not yet been spent, would be distributed to Indigenous communities on an urgent basis.

The NDP motion also calls on the government to drop its ongoing “belligerent and litigious” legal battles involving Indigenous communities. One case has the government pitted against survivors of the notorious St. Anne’s residential school in Northeastern Ontario. Two others, at the Canadian Human Rights Tribunal, are centred on compensation for children who were unnecessarily placed in child welfare and the application of Jordan’s Principle, which requires that First Nations children get access to services without delays caused by jurisdictional issues.

Asked by Mr. Singh why the government continues to pursue the cases, Indigenous Services Minister Marc Miller told the House of Commons Thursday that the human rights tribunal case was still being litigated because of outstanding questions around jurisdiction.

“Every First Nations child who suffered discrimination at the hands of the Child and Family Services system – that is broken – will receive just, fair and equitable compensation,” Mr. Miller said.

At the NDP’s virtual press conference Thursday, Cindy Blackstock, executive director of the First Nations Child and Family Caring Society of Canada and a long-time child welfare advocate, said the government was using the issue of jurisdiction as an excuse.

“Children are not a jurisdictional question – do the right thing, and if you want to take it up with the provinces or someone else, you can do that later,” she said.

St. Anne’s Residential School in Fort Albany, Ont., was the site of some of the most egregious abuse documented in the country’s long-standing residential school system. Students at the school were subjected to serial sexual abuse and physical violence, including being tortured in an electric chair. A 1990s investigation by the Ontario Provincial Police resulted in the conviction of five former school staff.

At the NDP press conference, survivor Evelyn Korkmaz said the federal government hid details of abuse at the school, adding that she and others involved in the case are fighting to have a fair trial and to have court orders enforced.

As of last fall, the government had already spent $3.2-million fighting the issue.

“Is this what you call reconciliation? Enough is enough – you must stop, Canada,” Ms. Korkmaz said. “Canada, no more talk, no more promises, no more crocodile tears – it’s time to take action.”

with files from Kristy Kirkup in Ottawa

Editor’s note: A comment from Indigenous Services Minister Marc Miller in relation to the St. Anne’s residential school was removed, after his office on Friday said he was referring to different court cases. 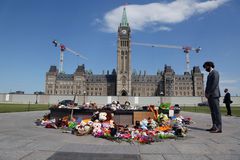 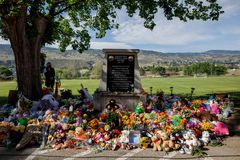 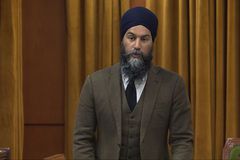