Netflix says it expects to go beyond its initial promise to spend $500-million on productions in Canada as the company’s growing presence in the country is being welcomed by some in a once-skeptical industry.

The U.S.-based streaming service states in a blog post to be published on Friday that it is “on track to exceed” the planned spending outlined in a five-year deal made with the federal government, which also included $25-million to develop new talents in Canada, especially among francophone and other minority groups. The company refused to provide further financial details, including how much it has spent in Canada to date.

When the federal government announced the investment a year ago, it was criticized by opposition parties and members of Canada’s cultural industries as being unfair to domestic competitors because Netflix does not have to charge sales tax on its Canadian subscriptions. Industry groups also complained about Netflix not having to abide by the rules that govern the country’s broadcasting industry, including an obligation to funnel a specific portion of its revenues to the creation of Canadian content.

A year later, the Directors Guild of Canada is praising Netflix for its initial investment in the country. “There’s no denying their contribution and we’d like all foreign streaming services to see the value in creating original Canadian programming that they do," guild president Tim Southam said.

While welcoming the investment, the Alliance of Canadian Cinema, Television and Radio Artists (ACTRA) is calling on the federal government to come up with a new cultural strategy that deals with foreign-based platforms.

“Internet broadcasters like Netflix and other over-the-top streamers must contribute to the system and support the production of Canadian content," said Stephen Waddell, ACTRA’s national executive director. "Globally, we are seeing increasing concentration and foreign ownership of the broadcast industry, which is threatening Canadian culture and the future of Canadian broadcasting.”

Netflix officials said they do not have a final figure for the company’s overall investment in Canada by 2022, given they cannot predict the exact spending in the latter years of its five-year deal. Still, they said Netflix, with 130 million subscribers around the world, continues to grow and spend more money on content, with Canada directly benefiting along the way.

Larry Tanz, the vice-president of content acquisition for Netflix, said Canadian industry has quickly adapted to the challenges of developing and producing shows for the international marketplace and will continue to play a key role in the company’s strategy.

“Creators and producers now know how to develop and pitch not just to Netflix, but to global platforms," he said in an interview on Thursday. "It’s been really interesting to see the creative community become cultivated and developed around thinking about shows for the global audience.”

The company is involved in projects across the country such as a series on monster hunters called October Faction being filmed in Southern Ontario and an upcoming SCTV reunion directed by Martin Scorsese. It’s also working on series such as Altered Carbon and Riverdale, and works with Canadian broadcasters on shows such as Frontier and Alias Grace.

After seeing shows from countries such as Spain and Germany becoming hits on the international service, Mr. Tanz said he is confident that French-language shows from Quebec could also succeed on Netflix.

“I’ll be honest, my views on this have really changed over the last 18 months as we have seen non-English language content travel incredibly well around the world,” he said. “As we are developing francophone talent, I’m optimistic that the supply of great ideas that are developed to the right stage will increase.”

No applause in Quebec as Mélanie Joly gives Netflix a free pass till after the next election
June 8, 2018 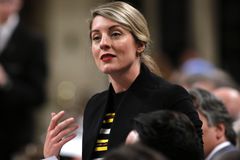